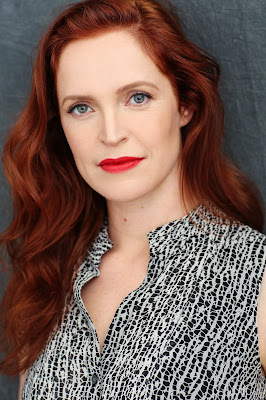 Education: I went to the Orange County High School of the Arts, and got my BFA in Drama and Art History from NYU.

Favorite Credits: Natasha, Pierre, & the Great Comet of 1812; In the Green; Alice by Heart; Bedbugs!!!

Why theater?: I grew up in a family of musicians and so performance was a big part of my life growing up. But I was (am) also quite shy and introverted. I found that in theater, by being able to inhabit and perform and live for a while as other people, I'm able to explore and express myself in a way that feels safe and revelatory.

Tell us about In the Green: In the Green imagines the origin story of Hildegard von Bingen, one of medieval Europe’s most powerful figures. Before Hildegard was a composer, artist, visionary, confidante of Kings, mystic, and saint, she was a little girl locked in a monastic cell with an anchoress called Jutta von Sponheim. The story is really about the relationship between student and mentor, mother and child, zealot and acolyte and the ways these kinds of foundational relationships shape a life. What do we do when we are forced to contend with our own darkness? Do we fight against it, or do we embrace it and find the light within?

What inspired you to write In the Green?: I was initially inspired by Hildegard von Bingen when I encountered her work in college, as I was studying Medieval art. Her work stands out as totally original, personal, feminine, in a time when most art was quite homogeneous. My fascination with her art lead me to learn about her music, poetry, philosophy, her books on the natural world and healing, and her communications with so of the powerful people of her time. I was struck by her accomplishments, particularly in her being able to accomplish them as a woman in the 12th century, a time when to be a woman was to be, generally speaking, non-existent. In my research, I kept being struck by the fact that none of her accomplishments really began until she was in her 40s (she lived to be in her 80s, almost unheard of for her time).  And before that, not much is known because she was living in that cell with Jutta, an extreme situation even at the time. And I became fascinated with Jutta – who was SHE, and how did she influence young Hildegard? Clearly they spent a LOT of time together during Hildegard's formative years, and in a highly unusual, highly intimate situation – but for all Hildegard’s talk (which is a lot, I think there are something 400 of her letters that we have, not to mention all her music art and three big books of visionary theology) she doesn't talk much about Jutta.  She calls Jutta "a pious woman who was crowned with a good death."  We know Jutta was a little older than Hildegard, that Hildegard was given to be a sort of hand maid to her when she was quite young, that Jutta came from a family of rank and had potential suitors. I decided to look at Jutta's choice to cloister herself in such an extreme manner as a sort of radical feminist act – if to be a woman in the 12th century was to be erased, Jutta chose to reject that notion HARD. By locking herself away from the world, that was a powerful act of control. We also know that Jutta rejected all kinds of creature comforts – she didn’t wear shoes even in the cold German winters, she lived on a diet even more restricted than the prescribed Benedictine diet, and she was a big fan of self-flagellation. She wore a hair shirt (clothing made from coarse animal hair, designed to irritate your skin), and when she died she was found to have a barbed chain around her body. Hildegard did not prescribe to ANY of this, and in fact she lived a life of abundant curiosity about life, surrounding herself with a community, learning about natural world, singing in harmony, getting her hands dirty. There’s a lot to celebrate about Hildegard – but I found myself continually curious about this shadowy figure of Jutta. WHY did she want to lock herself away from the world and mutilate her body and take in and care for a young girl? I kept looking at her with sympathy and curiosity and tenderness, and I wanted this to be just as much her story as Hildegard’s, because I think that she had a profound effect on Hildegard, even if that was to show Hildegard what she didn’t want to be.

What kind of theater speaks to you? What or who inspires you as an artist?: I love theater that really uses the magic particular to the form. I want to see bodies being used, space being revealed, voices filling the hollows of a space!  Some of my favorite theatrical experiences have been Home by Geoff Sobelle, Brief Encounter by Kneehigh Theatre, seeing The Great Comet when it was at Ars Nova (I got very lucky and saw the closing night performance and I mean it when I say it changed my life), anything that Steven Hoggett makes... I am inspired by innovation, by people who are pushing forms. My favorite musical group at the moment is Roomful of Teeth – they’re an a cappella group but they are using their voices in ways that blow my mind and inspire me to test the boundaries of conventional singing, group singing, songwriting, and storytelling.

How have you stayed creatively active during COVID?: I have a few projects I’m working on! I’m finishing an album with my band, working on a music video, working with novelist Kate Walbert to adapt her book A Short History of Women for the stage, working with writer/musician/performer Kate Douglas on a musical inspired by Victorian era medical texts about how music is purportedly dangerous for woman, I’ve started a writing collaboration with actor Adam Chanler-Berat, and am currently rehearsing for an Audible production of a musical that was supposed to be at Williamstown this past summer, Row, about Tori Murden McClure, the first woman to row solo across the Atlantic Ocean. My husband and I have also made a couple of very silly, very fun short films together :) But also, I want to stress that in order to do anything at all, let alone be creative, I have been doing a LOT of resting, walking, talking with friends and family, and quiet work to get in touch with my real priorities.

If you could work with anyone you’ve yet to work with, who would it be?: I would love to work with playwright Clare Barron.

What show have you recommended to your friends?: I’ve been loving “PEN15” and “What We Do in the Shadows.”

Who would play you in a movie about yourself and what would it be called?: I would love for a young dorky girl who loves boys but can’t talk to them, who reads Jane Austen alone in her room instead of running around outside, who blushes real hard and always gets cast as the mom in her high school productions to play me. It’s called An Artisan’s Mistake – this was my answer when my husband asked me once “What kind of break would you be?”

If you could go back in time and see any play or musical you missed, what would it be?: The original production of Oklahoma!

What’s your biggest guilty pleasure?: A boulevardier and a 90’s rom com.

If you weren’t working in theater, you would be _____?: A speech and language pathologist.

What’s up next?: See above!  But next next is the release of the physical album for In the Green, along with a single and music video from my band's new album. I'll be playing a live streamed show at Rockwood Music Hall on December 14th to celebrate all these things!

The new cast album of Grace’s musical In the Green is available from Ghostlight Records and is available at ghostlightrecords.lnk.to/inthegreen