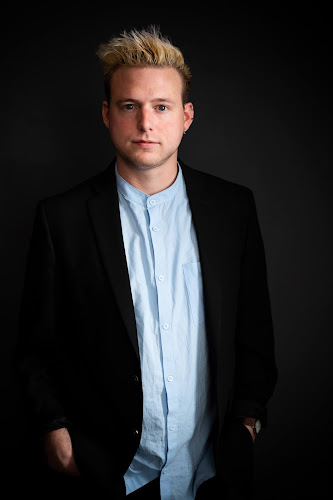 Favorite Credits: The extent of my performance career was being cast in the ensemble of Guys and Dolls twice… so by default those are my favorite credits. (I don’t know if this question really applied to me)

Why theater?: I fell in love with Tennessee Williams at a fairly impressionable age and I think that kind of sealed my fate. I tried to write a novel and made it about two hundred pages in… now it’s hidden away somewhere.

Tell us about Honey Fitz: Honey Fitz is a two act drama I began writing seven years ago as an assignment for my senior playwriting class at NYU. I never intended for the play to become what it is today. Honey takes place on the closing night at a local pub where its ghostly regulars return one last time to say goodbye. It is my second play and has changed so much since its first public reading at Theater for the New City in 2018. Since then the show has had three additional readings and a workshop production. I like to think of Honey as my second single, so it’s my “Poker Face.”

What inspired you to write/direct Honey Fitz?: I needed to write something drastically different from my first play Submission, which was a dark comedy about S/M with all gay characters. I wanted to challenge myself to write blue collar middle aged straight people. In fact originally there weren’t gay characters in Honey Fitz, but of course now there are, and I am even compared to the bitter gay bartender for some reason.

What kind of theater speaks to you? What or who inspires you as an artist?: Theater that is dark and twisty and sexual tends to win the day for me. A friend got me tickets to Slave Play in January and I absolutely loved it. Stoppard’s The Real Thing, Marber’s Closer, and David Hare’s Skylight are major influences of mine. And the umbrella play that sort of guides how I do everything is Schnitzler’s La Ronde. I love the structure and intimacy of two character scenes that take place immediately before or after sex.

If you could work with anyone you’ve yet to work with, who would it be?: Donna Murphy. I would write nine million plays for her. Starting today. If she asked.

What show have you recommended to your friends?: I love to recommend Vieux Carre by Tennessee Williams because that play sort of functions as an introduction to all his major character types, and it’s a bit of a ghost story. Second to that would be anything by Joe Orton and the Talking Heads series by Alan Bennett (which I credit entirely for my love of writing monologues).

Who would play you in a movie about yourself and what would it be called?: If I can time travel for a moment I would like to cast Peter Gabriel circa 1987 as myself in a movie I would have to call The Local Bottom.

If you could go back in time and see any play or musical you missed, what would it be?: Brigadoon. Opening Night. Without question. Although probably Angels in America… I think that’s the more respected answer.

What’s up next?: I’m trying to write a romantic horror movie for Zoom just to see if I can logistically pull that off. However I could set the script on fire at any moment.