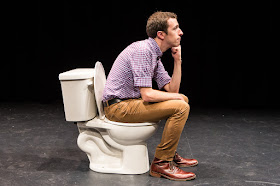 Favorite Credits: What Are You Doing Here?, a devised theatre piece presented by Project: Project

Why theater?: Theater, when done well, is magic.  When you watch an actor on stage slip on a banana peel and fall on his/her face, it’s so much more impressive than seeing that on film.  On film, that bit was crafted through numerous takes and edits (don’t get me wrong, still amazing, just in a different way).  On stage, however, that actor has only one chance to do the bit.  And when they nail it, that’s the only time that has ever happened.  Even if it’s during a long run, and that actor does that bit 200 times, it’s always different, each time completely unique to a specific moment of time.  Because of that, theater always feels like the most pure art form.

Tell us about Maybe Tomorrow: To me, Maybe Tomorrow is about marriage and what we do to sustain those long-term relationships.  For instance, it is not uncommon that one person in a relationship is a vegetarian, and with that, appropriate accommodations must be made.  Maybe that means the couple doesn’t go to steak houses very often, or maybe they have two sets of pans, one meat and one non-meat.  Whatever it is, that couple makes it work.  In Maybe Tomorrow, Gail and Ben’s “thing” is not that one of them is a vegetarian, but rather that one of them demands to live on the toilet non-stop.  The play, for me, asks if a functional (maybe even banal) relationship can last under such a condition.

What inspired you to write Maybe Tomorrow?: In 2008, I read about a news story of a woman who refused to leave her boyfriend’s bathroom, and for two years he brought her food and water.  At the same time, I was working on a production of Samuel Beckett’s Happy Days, about a woman who is buried in the ground, unmovable, for the entirety of the play.  I always felt a thematic overlap between the play and the real-life story, and like all my plays, I waited 7 years to actually write it.

What kind of theater speaks to you? What or who inspires you as an artist?: I love theater where there is not only great conflict between the characters on stage, but the form itself is in conflict with itself.  Or maybe I mean with audience expectations, where the show is pushing on the very fabric of the form in a surprising way.  Basically, I’m talking about Soho Rep’s production of An Octaroon, which is one of the best pieces of theater I have ever seen.

What show have you recommended to your friends?: For anyone looking for a Broadway show, I always recommend Curious Incident Of The Dog At Night. That’s what all big-budget shows should be like.

Who would play you in a movie about yourself and what would it be called?: Probably Jesse Eisenberg (I’ve been told he’s my celebrity doppelganger), and the move would be called "Are You Sure This Isn’t Undercooked?"

If you could go back in time and see any play or musical you missed, what would it be?: The premiere of Victor Hugo’s Hernani in Paris.

If you weren’t working in theater, you would be _____?: Writing something else.  I hope.

What’s up next?: In the Fall, I will begin purusing an M.F.A. in Playwriting from Columbia University!