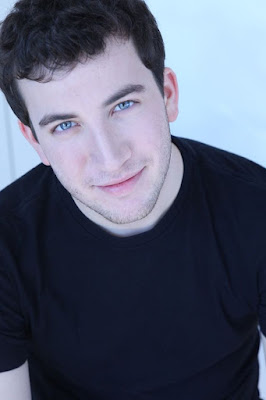 Why theater?: I made my Broadway debut when I was six years old in Peter Pan at the Gershwin theater. I caught the theater bug; I fell in love with being on a stage and entertaining people. Performing on a stage gives me the greatest rush in the world. I love the process of creating and crafting a show. I hope I can be in rehearsal rooms and on stages for the rest of my life, there is no greater feeling.

Who do you play in Running Interference?: Charlie

Tell us about Running Interference: Running Interference deals with the national debate with violence and its entertainment value in professional sports. It is a story about a backup Quarterback in the NFL who visits his lifelong friends’ lake house and struggles with the affects his multiple concussions have had on him. The show incorporates so many aspects of football in interesting and creative ways. It is a nuanced play that elicits all types of emotions.

What is it like being a part of Running Interference?: It’s an honor to be apart of this production. Every single person involved is driven and extremely talented. The rehearsal process has been an exciting place to be. Eric William Morris and Ashley Rodbro have written an unbelievably touching and timely show considering the state of concussions and former NFL players, directed by our focused and brilliant director Jonathan Judge-Russo. Our entire design team is a power house of talent. It’s been a pleasure to share the stage with Terra Mackintosh, Adam Petchel, and Jeff Todesco, we are really building great chemistry in rehearsal.

What kind of theater speaks to you? What or who inspires you as an artist?: I love all types of theater. I love theater that entertains and engages people. Heartfelt stories where actors connect with the audience always inspire me. I also love when you leave a show and can discuss it for hours. Seeing new shows always gets me so excited for the next project I’m going to work on.

Any roles you’re dying to play?: Max Bialystock. Rick Lyon’s track in Avenue Q. A new role that hasn’t been written yet.

What’s your favorite showtune?: Ahhh, ooohhh, too many to pick.

If you could work with anyone you’ve yet to work with, who would it be?: Mel Brooks!

Who would play you in a movie about yourself and what would it be called?: Miles Teller. “Ornithophobia! A nice jewish actors’ struggle with his fear of pigeons”

If you could go back in time and see any play or musical you missed, what would it be?: Mame. Company. Into the Woods. The original productions.

What show have you recommended to your friends?: Hand to God, I thought it was absolutely brilliant, unique, and it made me cry of laughter. Also, go see Dear Evan Hansen in Washington D.C., it’s incredible.

What’s your biggest guilty pleasure?: Chicken Parm or Chipotle, but I don’t really feel guilty about them anymore, I just eat them non-stop.

What’s up next?: I’m going to go get a burrito bowl at Chipotle. After that I will, hopefully, book more jobs doing what I love.