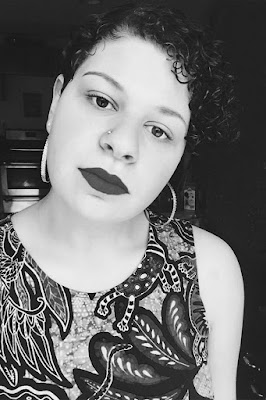 Favorite Credits: Most recently, We Go Together at The Kraine Theatre (Semicolon Theatre Company), dramaturgy for Ian Campbell's Ratcatcher at Marymount Manhattan College

Why theater?: Theatre, at its best, gets all up in your face. It's magnetic and immediate. It can't and won't be ignored. I genuinely believe that it's one of the most powerful tools humanity has for generating empathy.

Tell us about #Blessed: The simplest way to describe the play would be that it explores the events and relationships surrounding the rape of a religious freshman girl in a small-town high school. In some ways it's based in what I hope will feel like a familiar contemporary realism but there are elements of the spiritual and fantastical incorporated into the story. The play is narrated by a Greek chorus and Jesus may or may not make an appearance.

What inspired you to write #Blessed?: I started writing #Blessed at the tail end of my own experience as a student at a religious high school in a very liberal city. It began as a way for me to make sense of what I saw at the time as simply religious hypocrisy. What remains from the earliest drafts are the big questions about faith and growing up. As I've gained some distance from high school though, the play has as well. It's now a far more nuanced take on religion and sexuality -- more sympathetic, more complex, and more open-minded.

What kind of theater speaks to you? What or who inspires you as an artist?: I love complicated stories presented simply. I love hearing really specific, colloquial language onstage. I also really like verse, rap, and musical storytelling.

If you could work with anyone you’ve yet to work with, who would it be?: Currently obsessed with the directorial work of Rachel Chavkin. It would be a dream to create something with her.

What show have you recommended to your friends?: Recently, Small Mouth Sounds. Holy shit, it's mind-blowing.

Who would play you in a movie about yourself and what would it be called?: Ha! Probably Ilana Glazer from "Broad City". The movie would be called, "Why, Anxiety? I Was Just Sitting There!"

If you could go back in time and see any play or musical you missed, what would it be?: I can't pick just one! Definitely The original Broadway production of Who's Afraid of Virginia Woolf. Also, Ruby Rae Spiegel's Dry Land at Colt Coeur, Topdog/Underdog at the Public, Hedwig and the Angry Inch at the Jane Hotel in the 90s, and the original Eureka Theatre production of Angels in America.

If you weren’t working in theater, you would be _____?: A lot more financially stable! No, no, I kid. Um, probably a high school English teacher or an advocate for reproductive healthcare and education, maybe through Planned Parenthood.

What’s up next?: Finishing my BA, and then maybe grad school. I'm also finishing up the first drafts of two new plays with the intention of doing some initial workshopping/readings by the end of the year.
Michael Block at 4:29 PM
Share
‹
›
Home
View web version