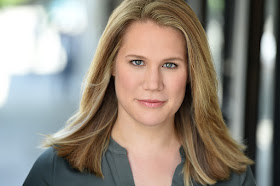 Favorite Credits: Gertrude Stein in A Serious Banquet at Judson Church & New York Theatre Workshop, Blanche in Thank You For Being A Friend – an Avenue Q styled play based on the Golden Girls! (Darlinghurst Theatre Sydney); An Olympic Swimmer in Pool Play (set & performed in a NYC pool, this play required dialogue intermingled with freestyle strokes – it was a lot of fun!); Writer-Director in Residence of Parramatta Now (a production involving 120 teenagers in Western Sydney); & my solo show The Day the Sky Turned Black which has taken me around the world including two seasons in Edinburgh and its most recent performance at Theatre Row in NYC.

Why theater?: It’s magical! I remember watching a production of The Lion the Witch and the Wardrobe at school when I was 8. Seeing an entirely new world created in a hall that usually housed assembly or gym was transformative. I knew that’s what I wanted to do…. So of course I went on to study economics at Sydney University and began a career as a management consultant. A little while later I watched a production of Joan Dideon’s solo play The Year of Magical Thinking. The piece charts the year Joan lost both her daughter and husband. Her struggle to carry-on in the face of such adversity so beautifully illustrated our universal struggle. It reminded me that we are each connected to all who came before and all who will come after by this universal experience of love & loss. And in that there is comfort, solidarity and hope. I knew then that I had to return to my first love with the hope of creating art that inspired, moved and brought a little magic into people’s lives. I auditioned for Bristol Old Vic Theatre School, was gratefully accepted and set forth to do just that.

Tell us about Let Them Eat Cake: An American Love Story: It’s an immersive version of the Greek Tragedy Oedipus. Using spectacle and black humor, we’ll be exploring the blindness of King Oedipus & Queen Jocasta (his mom/wife) to their illicit actions and their impact on the world around them. Expect magic, intrigue, revelation & fun and.. (alas)… tragedy.

What inspired you to write Let Them Eat Cake: An American Love Story?: I’m collaborating with Daniel Leeman Smith, & Marshall Experimental Theatre Company to write & create this play. We’re particularly interested in how the 2400 year old world of Oedipus finds parallels with our experience today. This can be seen particular clearly in the context of the GFC where the actions of a few infected the financial system of an entire interconnected world. We also love theatre that takes the audience out of the proscenium and places them squarely in the action. We want to create experiences that are not easily forgotten, that delight and challenge, provoke & entertain.

What kind of theater speaks to you? What or who inspires you as an artist?: I love all theatre - comedy, drama, classics, new work, documentary, improvised, solo work. It’s such an incredible art form. Why this play? & why now? are two questions at the heart of everything I do. Theatre that speaks to me is theatre that answers those questions. Also theatre that takes care of the audience and has them at the heart of its mission. I’ve trained extensively with Anne Bogart’s SITI Company and am now on the board of SITI Company and I’m tremendously inspired by the ways in which Anne & the company push the boundaries of artistic endeavor while holding the audience at the center of everything they do.

If you could work with anyone you’ve yet to work with, who would it be?: There are so many amazing incredible artists I’d love to work & collaborate with! Foremost in my mind is Moises Kaufman & Tectonic Theatre Project. They are such a bold, game changing company of incredible artistic & social merit. Their work the Laramie Project was so important for the world, for the LGBTQ community & for theatre. It showed the power of theatre to help shape our world, to heal, to wake people up and to make lives better. And they’ve kept on creating scintillating, rigorous & important work. It would be a dream come true to work with them and to be part of an organization that has had such a positive impact on the world.

What show have you recommended to your friends?: The Public’s Taming of the Shrew in the Park was amazing! The all-female cast was the perfect way to tackle a script that is rather misogynistic. I also loved Peter and the Starcatcher – it was magical! The Object Lesson & Nilaja Sun’s No Child are two of my all-time favorite solo plays. And Constellations for its exquisite writing! Two shows that are on now that I’d highly recommend Curious Incident of the Dog In The Night Time & Men on Boats (at Playwrights Horizons). There is a lot of wonderful theatre in this town!

If you weren’t working in theater, you would be _____?: Working in international development to address issues of systemic inequality.

What’s up next?:  In between the development & seasons of Let Them Eat Cake: An American Love Story, I’ll be playing the Prince of Darkness in Calderon’s Two Dreams at La Mama in early 2017. I’m also writing my next solo piece examining women in leadership.

For on Ali, visit www.alikennedyscott.com and http://www.marshallexperimental.org/
Michael Block at 1:00 AM
Share
‹
›
Home
View web version