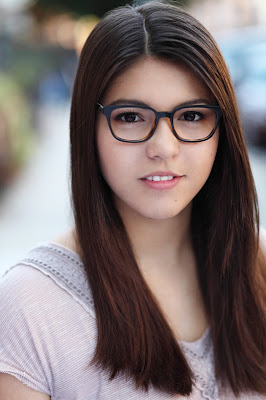 Why theater?: For me, it’s all about telling stories. Theater is personal, immediate, and honest. I’ve always been moved the most by theatrical pieces and stories, as opposed to novels or films. There’s nothing more special than being able to foster a mutual connection between an audience member and a theatre-maker in a particular instant.

Tell us about #Blessed: #Blessed is a beautiful piece of theatre that questions coping with adversity while the world around is rapidly changing. The play centers around fifteen-year-old Liana and her friends as they begin to cross the threshold from childhood to adulthood. The middle ground that they are living in is full of grey areas regarding sexual violence, religion, sexuality, and being a young person in 2016.

What inspired you to direct #Blessed?: It is unapologetic. It says what is has to say and it says it honestly and in a way that just draws you in. It is an honor to direct Zoe’s words again (she wrote We Go Together) and especially ones that carry such importance. I also appreciate how she doesn’t treat these young characters as young. They are, above all, human. As Zoe has said, they are “in touch with reality, even as it betrays them.”

What kind of theater speaks to you? What or who inspires you as an artist?: I tend to find myself attracted to a variety of different pieces. New works, multimedia pieces, plays with music and musicals, innovative adaptations -- I have favorites in all of those categories. One of my favorite plays of all time has to be Anne Washburn’s Mr. Burns, a post-electric play. As for inspiration, I find a lot of inspiration from the people around me, both those I know and those I can only read about.

If you could work with anyone you’ve yet to work with, who would it be?: Okay, this list is going to be long, but one of the greatest things about being a young female director in 2016 is that some truly incredible female directors are starting to get the spotlight they have deserved for so long. I’d love to assist/get coffee/admire from afar any of these people: Rachel Chavkin, Leigh Silverman, Lileana Blain-Cruz, Lila Neugebauer, Jackson Gay, Daniella Topol, to name a few. I guess I’d also like to work with Lin-Manuel Miranda because like…why not?

What show have you recommended to your friends?: Small Mouth Sounds at Ars Nova/Signature! Runaways at City Center! Hadestown at NYTW!

Who would play you in a movie about yourself and what would it be called?: It would be called “I Am Woman, Hear Me Roar Unless That’s Inconvenient For You In Which Case…” I have no idea who would play teenage me, but I definitely think that Phillipa Soo would play adult me.

If you could go back in time and see any play or musical you missed, what would it be?: Any show that was so revelatory and relevant in its time, like Angels in America, The Normal Heart, Rent.

If you weren’t working in theater, you would be _____?: Working in education (which isn’t so far from the truth, I guess, as I currently work in the education department of a not-for-profit theater). Other possible career ideas from the years of 2002-2013 included an EMT, an interior designer, and a ballet dancer.
Michael Block at 7:35 PM
Share
‹
›
Home
View web version