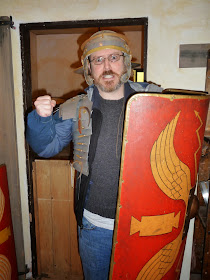 Education: University of Idaho (and unfinished Masters Degrees at Binghamton and Syracuse)

Why theater?: I don’t know that I have an intelligent answer. I’m good at it. I’ve always been good at it. I think we gravitate towards our talents, and (growing-up) the internet and film equipment were not available to me. Of course, they are now so… I don’t know what my current excuse is. Mostly, I do it because it makes me happy. When it doesn’t—I’ll stop.

Tell us about King Kirby: It’s the life story (in 75 minutes) of Jack Kirby (the artist behind X-Men, Iron Man, Thor, Captain America, and Fantastic Four, to name a few). It details how the man who shaped many of our childhood dreams and fantasies (along with much of the current Summer Box Office) largely lived in obscurity (relative to others who received the lion-share of the credit and revenue), and how that can happen to an artist.

What inspired you to direct King Kirby?: Scene 11 (is the short answer). Scene 11 is the “dream” of the meeting which never took place between Stan Lee and Jack Kirby (later in life). It’s an argument over Art (the moment of inception vs. the day-to-day detailing), and the arguments are so balanced—I found myself siding with both men. Balance makes great drama.

What kind of theater speaks to you? What or who inspires you as an artist?: As a matter of personal taste, I don’t tend to get excited over living room dramas or comedies. I love theatre that is “heightened” in some way, but knows how to walk with at least one foot on the ground. I also love silly comedies (I’m not going to pretend that I can reconcile these tastes). I remember seeing Tony Kushner’s adaptation of “The Illusion” at the Oregon Shakespeare Festival (just before “Angels” would hit Broadway) and thinking… “so that’s what theatre can be.”

If you could work with anyone you’ve yet to work with, who would it be?: Marian Seldes (she’s magic).

What show have you recommended to your friends?: I’ve had my head buried in rehearsals for so long that anything I’ve loved and would recommend has closed. I’ve seen nothing. I look forward to being able to see shows again. I suck. Sorry.

Who would play you in a movie about yourself and what would it be called?: Peter Lorre in “One life left for the fat Cat.” (it didn’t do great Box Office, but had a mention at Sundance)

What’s the most played song on your iTunes?: It’s “When You’re Falling” by Peter Gabriel and Afro Celt Sound System beating out “40 Day Dream” by Edward Sharpe and the Magnetic Zeroes by one play!

If you weren’t working in theater, you would be_____?:  I thought seriously about majoring in Oceanography (that wouldn’t have ended well for anyone), but wound-up going to a land-locked school so… we can put that alternate reality to rest.