When there is a trend in pop culture, everyone tries to capitalize on it. Better yet, when it’s a resurface or resurrection or reanimation or whatever zombie pun you’d like to use, attempting to pay homage plays a factor into the art that will eventually be created. When it comes to zombies, no one does it better than George Romero. And with the hit that is “The Walking Dead”, zombies are so in. But when it comes to zombies and musicals, you need much more than a love of the undead to make it work. Unfortunately the latest in the long string of zombie inspired musicals, The Zombies: a Musical may wish it hadn’t reanimated on stage.
Conceived and directed by Max Resto, The Zombies: a Musical is a send-up of Zombie flicks of yore. The Zombie Apocalypse has arrived and the characters in the musical, who haven’t been infected quite yet, are doing whatever it takes to survive. Some of the last surviving humans barricade themselves within two neighboring stores. Inside the gunship include Otis the gun-slinging hillbilly and his pal Bruce, who’s brought his two sons, Junior and Little Pete, with him. Across the way is Pedro’s restaurant and its inhabitants, the always sweeping Pedro, emo-gothic Chloe, the wise Odessa, and stoner Basil. As the story progresses, family drama and love triangle magically appear out of nowhere all while facing the harassment of graceful dancing zombies. 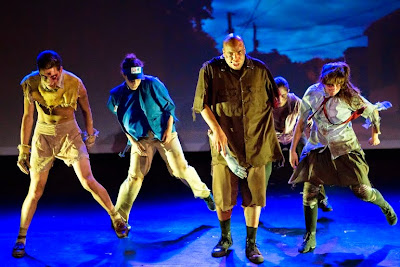 In a preshow speech, we’re told this project is only a year in the making. And it shows. The Zombies: a Musical suffers from a severe lack of staffing. With Max Resto serving as writer and director, there’s no one able to clean up the mess in the script of on the stage. From a directional standpoint, Resto breaks the rules of his own world constantly. When it comes to staging, the split screen idea is a clever device, however when we enter a location either via split screen or full stage, the relation of the wall to furniture needs to be consistent. The script plays upon stereotypes. Yet these stereotypes sometimes contradict each other. Additionally, the musical, billed as a comedy, becomes a propaganda piece on America and politics. Had they been presented in a comedic tone they may have been successful and suitable. Instead, they come as an “in your face” address. The script plays upon musical theater tropes but lacks the campy nature it so strongly wants to be. Dramatics and heart are welcome, but they’re not quite earned. When the campiest moments of the show come from the dance-like transitions, it appears as if it’s poking fun at the piece. With the amount of characters that garner “lead” status, there were many storylines to follow. While publicizing a “love triangle” and a “family drama”, you would think they were not interconnected. The character Junior is the one that truly crosses between the two, yet based on the poster, you’d never know. In fact, he truly is the source of the family drama as opposed to Little Pete, which is what is displayed.

The entire ensemble is committed, giving all they’ve got in their performance. With lackluster material and little to do, the characters are ordinary and desire depth and an arc. Of course, there are some that breakthrough the mundane. Rich Hollman as Otis is great, creating a hilarious character. He has a great vocal, providing even more comedy for Otis. While Junior’s story line is intriguing, the character is not as developed as he should be. Despite this, Alex Daly gives a solid performance with his show stopping rock out number. Alex Parrish as Little Pete and Daley’s Junior have great chemistry together as siblings. Though the late discovery of Pete’s age is disheartening. The Zombie chorus is fun but quite redundant, appearing way too often, serving more as a distraction to the weak script and score. Sam Given, billed as Will the Butt Naked Zombie, is so talented and wonderful to watch, he stands out as a terrific dancer in the Zombie chorus. 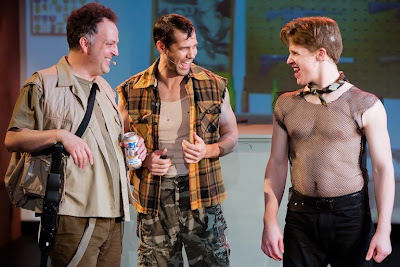 The choreography by Tricia Brouk overall was topnotch. The fluidity of movement she created for the zombies was pleasant to watch. When there was choreography during numbers that either didn’t require storytelling or was not a production number, the question of “why now” came up. And it came up way too often. Annette Weterby’s costume design is brilliant. The Zombies are so well done, aided greatly by Michelle Buongiovanni’s makeup design, they are the saving grace of the production. Overall, the costume design is quite strong with the great exception of the distracting and illogically unstereotypical mesh shirt Junior is forced to wear.
Projection design by Chris J. Noon adds nothing to the piece, especially when actors are forced to interact with it, there’s a loop of a distracting flickering light, or the Zodiac signs circle around during the love song. With the placement of certain set pieces, they ended up being in the way of the projections anyway. In the day and age of electronic music in theater, stripped down bands are common. With a “band” of two on the keys, the additional pre-recorded music to fill the band was a disservice to the actors. The dialogue in between verses and choruses seemed painfully timed to ensure they fit inside the canned vamps. With no room for error, acting these moments may have been an afterthought. In the small space and no band to compete with, the sound mixing was a disaster. The individual microphones were not helpful, occasionally dropping out during key musical moments.
By presenting in a venue like the Peter Jay Sharp theater with a steep ticket price, there is an expectation of great quality. While quality may have come in the form of costumes and makeup, the rest of the production greatly suffered. The Zombies: a Musical was an unfortunate case of not being ready for a grand production. It was an ambitious undertaking that may be remembered for all the wrong reasons.
Michael Block at 11:36 AM
Share
‹
›
Home
View web version