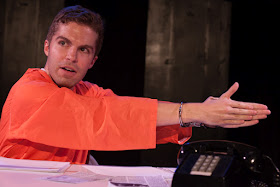 Select Credits: Playwright: There Was and There Wasn’t (Tisch Mainstage); Swingset/Moon (Telluride Playwrights Festival); various one acts throughout the country, including White Kwanzaa, Awake Anonymous, and It’s the Economy, Santa! Actor: Macbeth, Heisenberg in Copenhagen, and like every part ever in Midsummer, all in totally rad places in Georgia you’ve never heard of.

Why theater?: It was going to be law school. I mean really. I was accepted to law school. I bought my pencils. And at the last minute, I just knew I was too prone to burst into (out of tune) song to really fit in.

Tell us about My Date with Troy Davis: It’s my ultimate fantasy: a law school class where you’re supposed to burst into out of tune song. It’s about a period of my life where I was trying to figure out how to do good in the world. And I call that period of my life, my life.

What inspired you to create My Date with Troy Davis?: Not surprisingly, it was the execution of Troy Davis, a man many believed was innocent, by my home state of Georgia. I have often asked, what good can art do when faced with realities like this? Finally I decided to try and find out. Clearly, it’s also a comedy.

What kind of theater speaks to you? What or who inspires you as an artist?: The work of Spalding Gray inspires me a great deal. Whenever I want to take the easy, less honest, more flashy way out, I think, what would Spalding do? And he would just sit there and tell it to you. It’s hard to trust that.

Any roles you’re dying to play?: I’d love to play Berenger in Ionesco’s Exit the King. I want to die dying in that play. I bet you get that a lot, though.

What’s your favorite showtune?: “Endless Night,” which Julie Taymor co-wrote for The Lion King (take that, Bono). To me it’s all the more poignant because of what happened to Jason Raize, the man who first sang it.

If you could work with anyone you’ve yet to work with, who would it be?: Any of the Streep daughters who aren’t yet married.

Who would play you in a movie about yourself and what would it be called?: Christopher McDonald, the guy who played Shooter McGavin in Happy Gilmore. And it would be called “Please, Don’t Hug Me”.

What show have you recommended to your friends?: Anything at The Dancing Goat, the community theater in Georgia that birthed me. Next time you’re in Alpharetta, people. Oh and I also recommend whatever Reverend Billy is up to.

What’s your biggest guilty pleasure?: "Dance Moms". I can’t stop. I won’t stop. I think by the end there will only be one woman alive and me, clapping.

What’s up next?: I am appearing at LaMaMa in a piece directed by Dan Hurlin for Erik Ehn’s Soulographie play cycle. And I’m developing my project at Sarah Lawrence called No More Plays About White People. So get your kicks in now, fellow white folks. The end is near.

For more on My Date with Troy Davis, visit http://www.mydatewithtroydavis.com/
Michael Block at 10:00 AM
Share
‹
›
Home
View web version