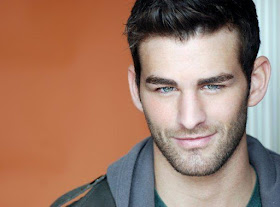 Why theater?: Theatre was always a big part of my childhood. I grew up going to shows on Broadway and was always involved school theatre but when it came down to choosing a drama school I chose one that was specifically for film acting. It's really great to go back to theatre after so long. It's so different, it's exciting and scary all at the same time!

Tell us about Pieces: I would best describe pieces as being a riveting 2 hour “Law and Order” episode that takes the audience into the sometimes dark and lonely world of the gay community. It portrays how the lgbt community struggles for equality and acceptance all at the same time of tearing one each other down. I play the role of Shane Holloway, a damaged young man who is convicted of brutally cutting a man into pieces.

What is it like being a part of Pieces?: I love our tight knit little cast of five! We are like a little family each bringing something different and important to the table. Our characters may have strong dislike towards one another on stage but off the stage we have a good time. This play has changed my life for sure. It has honestly made me a better person and has really open my eyes to the unfortunate hatred gay men specifically sometimes have for each other. I feel part of something truly inspiring and I feel as though people will be talking about this play for a very long time. The writing by Chris Phillips I amazing and our director, Brian Zimmer  really knows how to take us to that dark place needed to pull this play off. AND, the rest of the cast is all theatre veterans so so lucky to have them as guidance!

What kind of theater speaks to you? What or who inspires you as an artist?: I love theatre that takes you to places that sometimes can be uncomfortable but at the same time it can be truly inspiring. I love dramas. August Osage: County is one of my faves. As an artist I am most passionate about  heartbreak. It sounds depressing, I know, but it's what inspires me the most in my acting and singing/songwriting.

Any roles you’re dying to play?: I'd love to continue my journey with the theatre in NY! I feel so lucky to be playing the damaged murderer in Pieces. I've always wanted a role like this! I don't think anything can top Shane Holloway! Hopefully NY and LA will get to see more of him!

What’s your favorite showtune?: I gotta say I grew up obsessed with Phantom Of The Opera. I remember putting on reenactments of it with my little sister fr family members. We even made a chandelier out of paper that crashed to the ground at the end ha!

If you could work with anyone you’ve yet to work with, who would it be?: I would so love to work with Meryl Streep and Steven Spielberg one day

Who would play you in a movie about yourself and what would it be called?: I would want Ian Somerhalder to play me and it would be called 'Hope and Romance'.

What show have you recommended to your friends?: Of course I've recently been telling people to see PIECES, everyone always say it blew them away and I really believe in this story and how important it is to tell it.

What’s your biggest guilty pleasure?: Reality TV, being a hopeless romantic I love the "Bachelor"/ "Bachelorette" and I've always been a huge fan of "Big Brother"!

What’s up next?: Right now I am finishing up an EP that I hope to have up on iTunes and other online music stores early this fall!