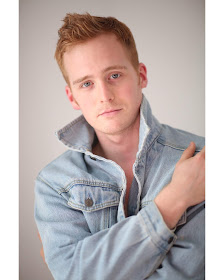 Favorite Credits: Charlie in The Whale, though the character is in his forties and I would never have been cast in the real world. Thank God for drama school!

Why theater?: We get to practice empathy, either seeking to understand others or soliciting to be understood ourselves. Often doing both simultaneously. And we get to do it while wearing pretty costumes. Which helps!

Tell us about STITCHES: STITCHES is a one-man show adapted from the graphic memoir by David Small. By incorporating other mediums such as sketching, painting, projection, and puppetry, we revisit Small’s tortured childhood; A botched surgery that left him virtually mute, his estranged relationship with his mother, and how his running away from home as a teenager led to a life of art and a prestigious career as a political cartoonist and illustrator. It’s a story of loneliness, trauma, perseverance, and the importance of art; Quite literally, in this case, giving the voiceless an ability to speak.

What inspired you to write STITCHES: This piece has been with me for nearly seven years now. My senior year of high school, I was tasked with devising a short play based off a person's life. I went to my public library with this silly, romantic idea that I would point to a book at random and it would change my life. And much to my surprise, it actually work. That ten minute rendition earned me a scholarship to attend the University of Michigan's drama program, which led to a full production with their student ran theatre company, and now it is making its NYC debut! David actually resides in Detroit, and I had the great honor to have him as a dramaturg and collaborator in the production's creative process. His talent is only outmatched by his unwavering generosity and kindness.

What kind of theater speaks to you? What or who inspires you as an artist?: When the story comes first, when there is an utter urgency to tell it. Indie theatre is hard work! That’s why I love the independent theatre scene in New York so much. These artists are putting on productions, often using personal funds and wearing several different hats to make it happen. But they believe it is worth it---that the time is now and people have to know about it. That's the type of theatre I love to attend.

If you could work with anyone you’ve yet to work with, who would it be?: Oh, I don't think we have enough pages! I have recently joined the Broadway Advocacy Coalition, and I highly recommend checking them out. BAC practices creative justice---using performance art as a way to seek intersectional change and restorative justice. I am really excited to get to collaborate with everybody on a deeper level and get to work!

What show have you recommended to your friends?: It has already closed, but I have told anyone within a ten foot radius to listen to the cast album of A Strange Loop. Michael R. Jackson and Larry Owens, man. Wow.

Who would play you in a movie about yourself and what would it be called?: I would demand to play myself! Get super meta and break the fourth wall a lot. Kinda like Heidi Schreck's What The Constitution Means To Me. But sassier and about a queer ginger from the Midwest.

If you could go back in time and see any play or musical you missed, what would it be?: Fortunately, New York has the Drama Library at Lincoln Center---of which I have spent many hours watching archives! But I would have loved to see Patti as Mama Rose live!

What’s your biggest guilty pleasure?: Hmm, I'm pretty shameless in my pleasures actually. Yeah, I don't have an answer to that! If it gives you pleasure, relinquish the guilt folks! LIVE YOUR TRUTH!

If you weren’t working in theater, you would be _____?: If I wasn't working in theatre, I would be working in advocacy/activism full time. Perhaps working on campaigns until it was my time to pursue public office. Which...isn't completely off the table.

What’s up next?: The future is a mysterious right now in a really exciting way! A couple projects have been in the creative process rotation for a while now. I think a musical is next on the docket. STITCHES will definitely continue to have a life---still figuring out the next steps. As for me personally? I bought a one-way ticket to Paris for February. I thought, "Tickets are cheap and climate change is real. Let's go!" So we will see what inspiration that might stir up.