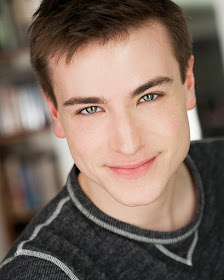 Why theater?: I've never done anything else since the age of 2, and I would have it no other way.  I don't think anything would be quite as fulfilling as this.

Who do you play in The Immortal Coil?: I am Ketchum Harley, an adorably clueless, young, new actor.

Tell us about The Immortal Coil: The Immortal Coil is a great new work by Jody Heaps focusing on the relationship between a young actor and his role model.  It's an eloquent and hilarious script with some great moments of darkness.

What is it like being a part of The Immortal Coil?: It's very collaborative! We always have a great time laughing and working together to make this a great piece!

What kind of theater speaks to you? What or who inspires you as an artist?: I'm really loving this immersive style of theatre that became so popular with Sleep No More.  It's just so alive and really transports you to another world.  I love working on brand new plays, and watching the library of great theatre keep growing.

Any roles you’re dying to play?: Anthony-Sweeney Todd, Miss Trunchbull-Matilda, Lord Farquad-Shrek, and I also have this passion to do an all male version of Nine in which I would want to portray the Claudia Jenssen role.

What’s your favorite showtune?: "Unusual Way" from Nine, and "Johanna" from Sweeney Todd.  I also can't stop singing "Last Midnight" from Into the Woods but I think we all go through that phase at least once.

If you could work with anyone you’ve yet to work with, who would it be?: Hands down, no questions, Jessica Lange.

Who would play you in a movie about yourself and what would it be called?: Kristin Chenoweth and it will be called "Legally Drunk: Red, White, and Bubbly".

If you could go back in time and see any play or musical you missed, what would it be?: Definitely the original Cabaret, or Robert Preston and Barbara Cook in The Music Man.

What show have you recommended to your friends?: I recently told a friend about the play The Memory of Water by Shelagh Stephenson.  It's a great piece for women.  Currently on Broadway, Fun Home is so beautiful and incredible.

What’s up next?: Auditioning!  I always update my site www.Spencer-Wilson.com with what I am up to!
Michael Block at 2:01 PM
Share
‹
›
Home
View web version