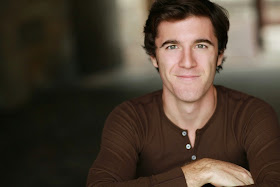 Why theater?: What do you mean WHY!?

Who do you play in Clinton the Musical?: Special Prosecutor Kenneth Starr.

Tell us about Clinton the Musical: If there was ever a presidency with all the qualities to make a musical, it would be the Clinton administration.   You have Bill as your flawed, double-sided hero, Hillary as your Evita, subsequently Monica Lewinsky as your mistress, Kenneth Starr and Newt Gingrich as your foils, and a flock of ridiculous newscasters to screw up the whole story for the public.  It's a smart and hilarious portrayal and told in the way we wish it could have been told in the 1990's.

What is it like being a part of Clinton the Musical: I've been very fortunate to have been involved with Clinton since last April, when Kaitlin Shaw from Tara Rubin Casting hired me as the reader for the auditions.  At the end of the day she asked me to audition for Kenneth Starr and year later I'm debuting the character Off-Broadway!  Working on a full production of a brand new musical comedy has been a dream come true.  The whole cast, crew, and creative team are wonderfully collaborative and hysterical.  I look forward to coming to "work" every day!

What kind of theater speaks to you? What or who inspires you as an artist?: I've always been drawn to ensemble pieces: musicals or plays where a small cast plays many different characters--I find a lot of humor in that.  I've also been big into Improv since I can remember, there's nothing like seeing funny people create something incredible out of a single suggestion.  I'm inspired by actors in theatre and film who are not afraid to make themselves to look ugly.

Any roles you’re dying to play?: Agatha Trunchbull in Matilda the Musical

If you could work with anyone you’ve yet to work with, who would it be?: Tina Fey, Catherine O'Hara, Julia Louis-Dreyfus, Jim Carrey, Drew Droege.   The list could go on and on.

Who would play you in a movie about yourself and what would it be called?: I asked my brothers this question. They responded with Conan O'Brien in "Butterface" and Sally Field in "Mrs. Surefire." I'd say Laurie Metcalf in "The Worst Witch 2."  She can do anything.

If you could go back in time and see any play or musical you missed, what would it be?: Angela Lansbury in Sweeney Todd, Mame, Gypsy, etc…

What show have you recommended to your friends?: Hedwig and the Angry Inch.

What’s up next?:  Clinton the Musical opening at New World Stages April 9th!  You can also keep track of me at www.kevin-zak.com or @kevinjzak on twitter.
Michael Block at 11:32 AM
Share
‹
›
Home
View web version