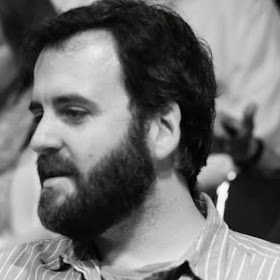 Why theater?: Theatre is immediate. Theatre is visceral. Theatre cannot be repeated. Theatre is meant to be enjoyed in one complete viewing. Artist and audience breathe together, live together, listen to each other, and slowly age together.

Tell us about Erik: This is my love letter/pastiche to Phantom Of The Opera. It's a 45 minute dark romp into the sewers of Paris via a side show carnival. And there's a puppet!

What inspired you to write Erik?: I have been a Phantom geek since second grade. A friend of mine in Elementary school (back in my Jersey days) had a Lon Chaney as Phantom action figure. I offered him two dollars for it. I realized I only had fifty cents. I was lucky. The fifth graders were selling baked goods that day and fifty cents went a long way. He was happy to take the money. I've watched every version of Phantom, every iteration, read several translations of the novel. But the most impressive is the Lon Chaney silent film. It remains one of my favorites films to this date.

What kind of theater speaks to you? What or who inspires you as an artist?: Committed theatre inspires me. If the aesthetic is consistent, if the internal logic is consistent, I'm willing to take the ride. I've seen a lot of beautiful failures, and I will take them over productions that play it entirely safe. That's not to say I don't like commercial theatre or that I only like postmodern and/or postdramatic works. There is a lot of great stuff going on; so many different approaches. I have been truly blessed to work with so many great directors - Akia, Rachel Klein, Jerrod Bogard, Dan Horrigan, Erin Smiley, Tom Berger, Dennis Wayne Gleason, Susan Paige Lane, Anna Gorman, David Crowe.   I love Robert Wilson, Qui Nguyen and The Vampire Cowboys; I love Caryl Churchill, Sam Shepard, Neal Bell, and Maria Irene Fornes; I equally love Conor McPherson and Brian Friel.  I'm inspired by music most of all: Tom Waits, Laurie Anderson, The Beatles, Philip Glass, Leonard Cohen, Patti Smith, The Felice Brothers, Lou Reed, Serge Gainsbourg, They Might Be Giants. Too many to list! And I have to mention Edward Hopper's paintings. When I look at his work, I just want to write. I need to write.

If you could work with anyone you’ve yet to work with, who would it be?: Any of the amazing artists listed above!

What show have you recommended to your friends?: There was an incredible production of Under Construction at the University of Georgia directed by Adron Farris. It remains one of best experiences I've had at the theatre, second only to Robert Wilson's direction of A Dream Play.

Who would play you in a movie about yourself and what would it be called?: Jack Black is John Patrick Bray in “Two Monkeys, Ten Minutes”.

If you could go back in time and see any play or musical you missed, what would it be?: It's a toss-up between The Living Theatre's production of Jack Gelber's The Connection and anything at Caffe Cino back in the days of yore.

What’s your biggest guilty pleasure?: Cher has never released a bad song. EVER. Neither has Jim Steinman. EVER.

If you weren’t working in theater, you would be: Baking bagels back at my old bagel shop (New Paltz Bagel Cafe).
Michael Block at 2:25 PM
Share
‹
›
Home
View web version