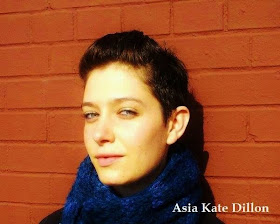 Tell us about Kapow-i GoGo: It's Saturday morning cartoons for drunk adults!

What’s the wildest costume you wear in Kapow-i GoGo?: I don't want to reveal too much so I'll just say that my gunnblade is certainly a weapon to behold.

If you could be a character from any anime or cartoon, who would you be?: Winnie the Pooh

Which company member has the most larger than life personality?: Matt Cox

Which company member is most likely to get lost in this world?: Alex Gould

Most likely to actually be a cartoon character in real life?: Evan Maltby

Most likely to be a super villain?: Colin Waitt. Which is interesting since he was recently seen as Jesus in The Mysteries...

Most likely to go on an epic journey?: Hank Lin

Revenge or vengeance?: I can't remember...

What would be your victory song?: "Nothing Compares 2 U" by Prince

What is your signature move?: When I use my gunnblade.

What’s the biggest inside joke at Kapow-i GoGo?: I can't remember...

Why should we come see Kapow-i GoGo?: As we get older it gets harder and harder to retain a sense of pure optimism, the kind of optimism we would be reminded of when we scrambled to get in front of our favorite cartoon show when we were kids. As we inevitably watched our hero, on shows like "Hey Arnold!" or "Sailor Moon", overcome their bullies in school or save the world from an evil monster or learn the powerful lesson of forgiveness our favorite shows helped us arm ourselves emotionally for the punches that life would throw. So here we are, as adults, still looking for ways to arm ourselves emotionally because life it truly pretty effing tough. But life is also pretty effing great. Kapowi-GoGo! reminds us of the power in #believing in yourself and fighting for what you #believe in with everything that you've got. This is the kind of optimism that will ultimately save the world. You'll laugh (definitely), you'll cry (maybe, probably) and you'll fall in love with a whole new cast of live action cartoon characters who are bringing every classic cartoon genre into play. Come join us. The fate of the world depends on it!
Michael Block at 12:08 PM
Share
‹
›
Home
View web version