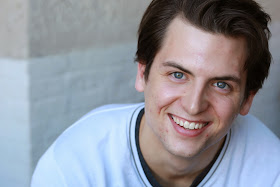 Hometown: That's a hard question to answer for me. I suppose the closest answer to that question would be Chatham NJ.

Tell us about Stripped: Stripped for me is a piece about brotherhood and finding your own way. Sometimes the people you hold closest wont be able to continue with you down the road of necessary change. Chester needs this change but wont accept it in his heart. Its more of an idea to him than an actual application and practice. This naturally creates some friction between the characters.

Who do you play in Stripped?: I play Chester Graves in this production.

Describe your character in three words: Chester can be best described as Hardheaded, Defensive, Sensitive.

Are you a baseball fan or a baseball player?: I played baseball when I was a kid, but never truly fell in love with it. I preferred Football to Baseball and after one season at the age of 8 I decided Baseball just wasn't for me. In fact I was so bored with it I only made tee-pees with the grass and did cartwheels, balls would fly past my head but I wouldn't break from my fantasy world. My Father would always take me to Braves games when I visited him in GA. Nothing beats watching it in person. There is a real sense of  direction in the stadium that is contagious to anyone, regardless of how familiar they are with the sport.

Which company member is most athletic?: I think that Ben maybe the most athletic, he played rugby for a while so I know he can hit.

Most competitive?: Besides myself? Then it would be Christian.

Most likely to work at a strip club?: She is going to kill me, but Chloe would make a great stripper. [ Laughs] I can see her slapping the s**t out of me for that one.

Most likely to be a pro baseball player?: Tyler Grimes, he knows so much about the inner life of the sport. The small technicalities. Watching him watch the World Series was enlightening, he would most certainly find a way in to Big Leagues.

Most likely to wake up next to you in a jail cell?: That would anyone of us. Whether it's that we all made a big mistake or one of us backed the other up in a precarious situation.

What’s your favorite ball game snack?: Hands down it the Peanuts... And being able to throw them on the floor when you're next to your parents. I don't know it feels like I'm breaking all the rules once that starts.

What is the best thing about being a part of Stripped?: To work with this company. I always tell other actors to keep a close eye on this group. They are so talented and dedicated and they also involve themselves in other categories in life and promptly become bosses in those areas as well.

What’s your favorite moment in Stripped?: The Videogame scene with Joesph. We have so much fun messing around.

Why should we come see Stripped?: It will raise questions that everyone should be thinking about. That's what the theater is for, to breathe in experiences first hand. Without someone leading your point of view. Pretty cool stuff. 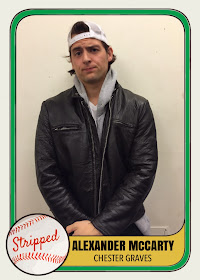