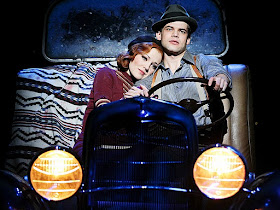 There should be a rule about how many Broadway flops you’re allowed before you receive a lifetime ban. Frank Wildhorn, I’m looking at you. And here we were thinking it would be hard to be worse than Wonderland! At least that disaster had music that worked! Bonnie and Clyde, the musical that followed depression era lovers and bandits, Bonnie and Clyde, arrives on Broadway and does nothing but fire blanks.
This Bonnie and Clyde is not based on the movie, according to the author notes. This story follows the love of two young kids looking for happiness in the age of debt. And of course the only way to happiness is to steal…duh! Jeremy Jordan, previously of Newsies fame (wish you could hop in a time machine now don’t ya!) and Laura Osnes, who is unfortnatley cast because she has more talent than what she was allowed to showcase, play Clyde and Bonnie. Jordan looks gangster-lite. Al Capone would laugh at the sight of him. Osnes plays the radiant red head full of hope. Only hope comes in the way of her macho man. Sure, the duo had chemistry, but they lacked motivation. Yes, they sung their brains out. But the music they were provided had no business being in a 1930s era musical set in Texas. A jazzy feel works if you’re up in Chicago with Capone, not Dallas. And a score featuring an electric guitar?! Unacceptable!
It’s hard to fault the actors for the train wreck that is Bonnie and Clyde. Jordan and Osnes do the best they can. Melissa Van Der Schyff is wonderful. Claybourne Elder has the potential to be a huge star. The fault should be pointed toward Wildhorn and director Jeff Calhoun. On a side note, Calhoun should be ashamed that he has a choreography credit. It was more like musical staging. Wildhorn had mild success with Jekyll and Hyde and The Scarlet Pimpernel. He bombed with Wonderland. And again, he has no luck. Four musical adaptations. Perhaps it’s time to move on and create a 100% original musical. I will give him credit that there were some catchy tunes, but it was drab and bit forgettable score. Calhoun has seen glory helming the soon-to-be mega hit Newsies. But having scenes where key moments of dialogue are spoken with the actor’s back to the audience is unforgivable. The atrocious set could be partially to blame. Perhaps Tobin Ost took on too much when he designed the costumes and the set. Levels are always important in designing a set. It gives a director a playground. But this set had levels and ramps and things coming in and out way too often. There was very little payoff. It made the stage pictures suffer severely.
The source material allowed for something that could have been so great. A story about love from the least likely of pairs. We didn’t need the exposition including young Bonnie and Clyde. We didn’t need the pathetic love “triangle” where Louis Hobson’s Ted was made to look like a complete moron. We didn’t need the unnecessary MODERN projections. Bonnie and Clyde is a spectacle of tragic proportions.
Michael Block at 6:40 PM
Share
‹
›
Home
View web version