Review: All About the Spider Men 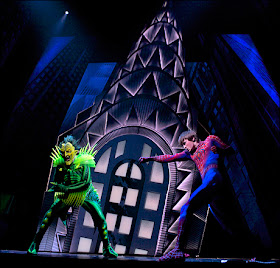 Ok. Let’s get the exposition out of the way now. A long time ago, a musical venture known as Spider-Man: Turn Off the Dark emerged on the Great White Way lead by legends Julie Taymor and Bono and the Edge. When it began, many speculated what this extravaganza would be. Audiences would come in hopes the show would be stopped to experience something that rarely happens on Broadway. Injuries were sustained. Rewrites were eminent. Personnel changes were inevitable. And thus, Spider-Man: Turn Off the Dark is the show audiences see today.
I remember being in a Chipotle last October, sitting next to a certain star discuss the tech experience with his band. The quotes I overhead were priceless. Priceless, but true. I remember wanting to take every opportunity to mock it, despite not even seeing the show because it was the easy thing to do. It is easy for the theater person to rip the show apart. It’s easy to dissect every tiny moment that doesn’t quite work. Yes, the music sounds like it’s specifically written for a certain Irish rock star’s voice. Sure, the book has some flaws, especially with the two blatant U2 shout outs. But that’s not why we go to see the show. We go for Spider-Man. The show is visually stunning. At every moment, something or someone is moving. You will never get tired of seeing what comes next. What turns into what. Who pops out where. Spider-Man is a spectacle for the eye. If you’re an avid fan of the comic books or even the movie, you will be disappointed at the liberties taken. The story has been altered. Characters were added. Motives have been changed. But let’s be honest, we would have been pissed if they decided to use the “safe” approach and put up a show that we already know.
You can knock the technical aspects of the libretto and the music, but regardless, night after night there is a phenomenal, dedicated group of performers giving the show life. Reeve Carney is an atypical Broadway star, but he is certainly committed. Patrick Page is a pro. When the script finally allowed him to be the comic he truly is, he shined and stopped the show (no pun intended). But the most thrilling part of the show is the work done by the ensemble. Being a part of an ensemble is no easy undertaking. This ensemble is the heart of the show. They play so many whacky roles in so many elaborate costumes and there is not a phoned in moment to be seen. Daniel Ezralow and Chase Brock have created some wonderful choreography. They showcase the ensemble quite well. And it doesn’t hurt that the performance I saw included one of my favorite dancers to grace Broadway, Paul McGill. One of the highlights of the show was the song “Boy Falls From the Sky” not because Carney necessarily knocked the song out of the park, but the brilliant choreography which featured the brilliant mirror image effect of all the men in their Spider-Man costume. It was stunning moment.
This show has been kicked around. It’s the ugly stepkid of Broadway. But it deserves some recognition. It an experience that every theater person should have. Regardless if you dislike the show, you’ll have a conversation about your thoughts, and really isn’t that what art is supposed to do?
Michael Block at 12:15 AM
Share
‹
›
Home
View web version