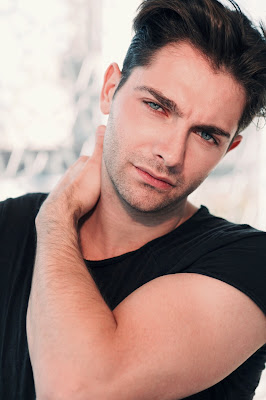 Tell us about Fire On Babylon: It’s about a reclusive author who has accepted the first half of an advance for a follow-up to his successful debut novel. His publisher sends a young editor to help him on what turns out to be the day of the 2003 Blackout. They end up stuck in the author’s apartment and...it’s hard for me to talk about what happens next. Let’s just say, it’s not at all what it seems.

What inspired you to write Fire On Babylon?: Human connection and communication are the beginning, middle and end of creativity for me. I wanted to write a story about two seemingly opposite people. An older person at the end of his rope and a younger person who feels like his life has ended before it’s really started. Both of these guys have a distorted view of what’s actually in front of them.

What kind of theater speaks to you? What or who inspires you as an artist?: I’ve always wished that I could be one of those playwrights who can read an article in the Times and write a play about it. I love watching those kinds of plays. I love complicated plays, ones that have prismatic, paradoxical characters put into an impossible situation and then have to fight their way out of it. Nothing gets me as excited as a metaphorical musical chairs situation. Three characters who all need a seat to survive but there are only two available chairs. If the cortisol and adrenaline are coursing, it’s a good play.

If you could work with anyone you’ve yet to work with, who would it be?: As a writer? I know it’s not possible but collaborating with Pina Bausch would have been awesome. Austin Pendleton and I have been talking for ages about working together on something. I haven’t worked with a female director in a long time as a playwright and that’d be great.

What show have you recommended to your friends?: Bedlam’s Sense & Sensibility.

Who would play you in a movie about yourself and what would it be called?: I’d call it "Stuck on the Moon". Judi Dench would play me. Or Daniel Day Lewis. Or Queen Latifah.

If you could go back in time and see any play or musical you missed, what would it be?: The production of The Count of Monte Cristo that James O’Neill did. That thing participated in the generation of some of the greatest plays we’ve got. I sometimes wonder how much healthier Eugene O’Neill would have been if his father hadn’t done that, though we might not have had Long Day’s Journey or Iceman.

If you weren’t working in theater, you would be _____?: Clawing my way back to the theater probably. Or Indiana Jones. Being Indiana Jones is actually a pretty great deal. Let’s go with Indiana Jones.

What’s up next?: Things have been very busy with getting Babylon off the ground. I have some other pieces in the oven. I have a couple of articles for Hamptons Monthly that’ll be coming out over the next few weeks. I’m doing my best to stay in the present moment as much as possible.