When you have a lot of thoughts, sometimes it's hard to process them all. Especially all at once. When emotions are thrown into the mix, you can imagine the turmoil that your brain experiences. And sometimes those thoughts lead to new and dangerous thoughts. Just ask the mind of Stephen Powell. In A Stopping Place, Powell goes on a psychological journey that leads him into crisis mode.
To put it bluntly, A Stopping Place is an existential stream of conscienceless about the loneliness of one man. Powell's text is tangential, jumping around quite like the inside of your brain. But not how Disney imagined in "Inside Out". With the chaotic style of storytelling, Powell's solo piece never quite finds its footing. It's nice to give the audience something to think about and piece together on their own but sometimes there can be too much ambiguity. A Stopping Place is an example of this. Powell loses steam due to complete ambiguity. With all that being said, A Stopping Place is a bit of an anomaly when it comes to classic solo show structure. And that's a bit exciting. Once Powell can reign it in, Powell and the magic he infuses can be even more pointed.
Putting yourself out there, alone onstage is a brace feat. Stephen Powell is a charismatic performer who can tell a story. He has a unique way with words. It's not emphatic yet there is emphasis. Powell has a sly cynicism in his demeanor in this piece. The only thing lacking was ambition. 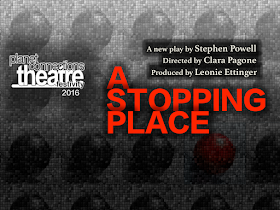 With ambiguity, in order for A Stopping Place to succeed clarity was crucial. Clara Pagone's direction was not as clear as it could have been. Pagone had moments but there were some undefined beats. One of the biggest question marks was defining the start and end of the show. Seamless is one thing but when an audience is unsure of what to do, it causes a sense of discomfort. Had Pagone been a bit more deliberate, her vision may have come true. The other beat was cleaning up just how the world worked with the "walls" of the world. Powell was often thwarted by this barrier yet he was able to communicate to someone, whoever his audience was. It was interesting to define the playing space with the fabric to help break up the monotony of space.
A Stopping Place was a play about getting out, philosophically. But when the audience has a hard time getting in in the first place, getting out isn’t a possibility. Stephen Powell infuses magic into his play. Just a little more magically clarity and he’s on his way.
Michael Block at 1:20 PM
Share
‹
›
Home
View web version