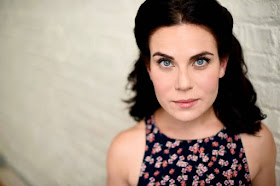 Why theater?: This is a bit heady, but I've always thought of sociology and theatre as two sides of the same coin: Sociology is the science of studying people and Theatre is the art of studying people. Theatre (and the arts in general) teaches you to put yourself in the headspace and heart space of other people; you start to imagine other people's hopes and other people's pain, and you realize how much we all have in common (I may or may not have stolen that last bit from a speech President Obama gave because he put it far more eloquently than I ever could). Also, theatre in particular is so special and unique because it's immediate; it's fleeting, it's ephemeral, and it gets people talking. Each performance is its own thing; no two audiences will ever see the same play, and that's pretty remarkable.

Who do you play in Liberty?: Emma Lazarus, the poet responsible for "The New Colossus" (the poem that's written on the base of the Statue of Liberty)

Tell us about Liberty: An exciting new musical that doubles as a history lesson!

What is it like being a part of Liberty: It's really wonderful to be a part of a brand new musical, especially since I've been lucky enough to be a part of Liberty since its earliest stages (2011). There are a couple of people in the cast who've been with the show a bit longer than I have so they'll be able to speak to this more than I can, but it's been thrilling to see how the show has grown and changed over the years. Some changes have been quite small while others have been monumental (no pun intended). It's also an added bonus to have a newly acquired, fairly extensive knowledge of an event in our country's history that I'd had very little knowledge of before. Thanks, Liberty!

What kind of theater speaks to you? Who or who inspires you as an artist?: Super old school musicals and ensemble based storytelling (a la Peter And The Starcatcher and what's happening in the wonderful city of Chicago, my home).  I'm inspired by my friends and my family. It's not lost on me how fortunate I was growing up and how fortunate I've been and continue to be. In terms of artists that I look up to, I'd love to be some combination of Carey Mulligan, Celia Keenan-Bolger, and Laura Benanti when I grow up. Also, I have and will drop anything to see Mark Rylance do anything anywhere ever.

Any roles you’re dying to play?: Jessica in Hand To God, Julie Jordan in Carousel, Eliza Doolittle in My Fair Lady, Phoebe D'Ysquith in Gentleman's Guide...

What’s your favorite show tune?: It's a tie; either "Johanna"from Sweeney Todd or "Make Our Garden Grow" from Candide.

If you could work with anyone you’ve yet to work with, who would it be?: Jim Corti and Tom Vendafreddo, the dream team at the helm of the Paramount Theatre in Aurora (just outside of Chicago). Katie Spelman and William Angulo, two young and brilliant choreographers who are redefining how to tell stories through dance and movement.

Who would play you in a movie about yourself and what would it be called?: The movie would probably be called "My Amplitude Lacks Altitude" (though that sounds more like a comedy special). No idea who would play me...probably someone yet to graduate from my high school theatre company (go New Players!)

If you could go back in time and see any play or musical you missed, what would it be?: The original Sweeney Todd.

What show have you recommended to your friends?: It's since closed, but the last thing I was shouting from the rooftops for people to go see was Hand To God.

What’s up next?: Teaching myself pastry. I've already conquered macaron, eclairs and creme pâtissière. Croissants are next on my list.