Who doesn’t love a little musical comedy? Especially when it’s campy and pokes fun at the style itself. Oh, and when the jokes are actually funny. In the new musical Propaganda! The Musical, Rookie, the new heir to a national cover up bureau, is given the difficult task of covering up a potentially ginormous Presidential scandal. 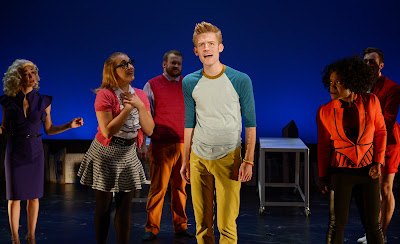 Written by Taylor Ferrera and Matt Webster, Propaganda! The Musical is a laugh out loud comedy that pokes fun in all the right places. When Grandpa, the number one at a bureau that handles all kinds of scandal cover ups, dies, instead of leaving the business to his number 2, the sexy and she knows it Agent X, Grandpa leaves the hard task to his adorable, bright eyed grandson Rookie. When Rookie is tasked with one of the biggest scandals ever, he needs to figure out a way to cover it up, and fast. And what better up to cover up a scandal than with musical theater! Though it probably was called Scandal! the Musical at some point, Ferrera and Webster have created a vibrant and cartoonish world where campy is served every second. And it works. It works real well. Ferrera and Webster are clear what this world wants to be and how large these characters can go. Ferrera and Webster, who share book, lyrics, and music credits, have infused a poppy score that is catchy with instant toe tappers. If the key to a successful musical is being able to remember the music when the curtain drops, then Ferrera and Webster have succeed this with nearly every song. If a critique could be had, the Act I finale wanted to be even grander and more upbeat. For a musical of this magnitude, the book is quite strong. It’s witty and invigorating, filled with hilarity. They skillful incorporate a plethora of recurring jokes and subtle theater inside jokes. Though they were aided by an outstanding ensemble, their characters were quite well rounded and fun.
The entire ensemble is strong and marvelous to watch. In the leading role as Rookie, Dale Sampson is brilliant. Sampson is insanely, and unfairly, talented as the sweet and endearing Rookie. His range, from heart breaker to leader to comedic genius, is quite astounding. Sampson has a voice to be jealous of and comedic timing to strive for. A star was born with that performance. Kenita R. Miller is hilarious as the evil Agent X, the fierce ass queen. Miller, like Sampson, is a strong physical comedian, bringing well-executed divatude. She holds her own, sharing the spotlight with the help of her Fierce Ass Girls (there’s a brilliant acronym here!) played sexily by the hot ensemble of Benjiman Dallas Redding, Nick Mason, and Shaun Repetto, all of whom get to show off their legs. Beth Cheryl Tarnow as the cleverly named Tary owns the stage with her moments of unrequited love to the not-so-ambiguously not straight Rookie. Again, Tarnow is a stellar comedian. Rounding out the equally great cast are Kenny Morris as Grandpa and Harry, Jillian Wallach as Board Member 1, Marc Cornes as Ted, and the super trooper MaryJoanna Grisso who is the star of one of the more hilarious recurring bits. 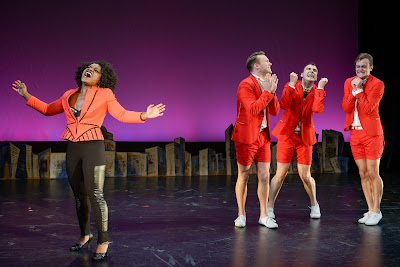 Leading the team is director Nathan Brewer. Brewer’s direction is phenomenal, capturing the camp to a t. Brewer effortless discovered the comedy which made the piece shine. Knowing when to pander and when to allow for a natural laugh won the audience over. The choreography by Jason Sparks is spunky and high energy, bringing the musical theater style in full force. His choreography was clever and really meshed well with the music. The overall design of the musical was topnotch. Sky Switser’s color splash design was vibrant, truly capturing the spirit of the show. Scenic designer Ryan Howell utilized the space, keeping everything simple and mobile, aiding to Sparks choreography.   Propaganda! The Musical is an example of a cohesive collaboration.
Hitting a jackpot with a new work on the first try is very rare. But when you do, it’s almost like watching musical theater history in the making. Fortunately, if you catch Propaganda! The Musical at NYMF, chances are you’ve seen a future smash. Creators Taylor Ferrera and Matt Webster have a very bright future. Though Ferrera and Webster have an incredibly tough task in their future collaborations: figuring out a way to top perfection.
Michael Block at 6:31 PM
Share
‹
›
Home
View web version