I’ve found since I moved to New York, it’s rare to see real life on stage, meaning what actually happens in real life. What it means to be in love. What it means to fall out of love. What it means to feel betrayed. What it means to actually learn how to grow up. What it means to be afraid of feelings. What it means to have a relationship. And then I saw Cory Conley’s The More Loving One. If you know anything about me as a writer, you can coin me as “the relationship play” guy. That’s my niche. That’s what I love to write. As humble as it’ll come out, I like to think my stuff is pretty top notch. But this play gives me newfound inspiration. Mr. Conley gives me a run for my money! If you’re looking for a near perfect Fringe production, The More Loving One will not disappoint. Fringe is usually filled with kitschy, shticky pieces. This is not one of those. And that’s what’s so refreshing.
The play follows two couples as they grapple with their personal relationships in the wake of an underage sex trial. The first couple, Matt and Lauren, are a married couple who are thrust right in the middle of the sex trial as it happens to be Matt’s “oldest friend in town” who’s on trial. When Lauren reveals a bit of sympathy for the man on trial, Matt begins to berate her causing the start of their on stage marital meltdown. In the middle of the fight, Henry, a stranger by presence but not of name, walks in, yet Lauren and Matt do not yield. Even when Heinrich, Matt and Laruen’s roommate, and the other half of the couple, waltzes in, the fight continues to escalate. It’s not until the four are present in the room do the secrets start to get revealed. The way Conley has structured the play is quite fantastic. We begin in the present and then transition into a flashback, allowing us to learn of the secrets that fuel the fire in the present. It’s quite easy to instantly take a liken to David Beck’s Matt, but as we truly begin to learn of his character, he turns into an heartless, selfish monster. We learn that Matt and Lauren, beautifully and heartfully portrayed by Adriana Degirolami, artificially have to conceive a child, which helps to prompt Matt to ask Lauren to kick out Heinrich of the apartment. We learn this through the flashback and with this knowledge, Heinrich’s vendetta against Matt in the present can be considered evil as he reveals Matt’s involvement the night of allegation. While the focus seems to be on Matt and Lauren, Heinrich and his younger lover Henry are also having their fair share of relationship woes. Heinrich asks Henry to marry him, prompting an in-restaurant dialogue of it’s the right time and place. This is by far the most heartbreaking and heartfelt scene of the play. 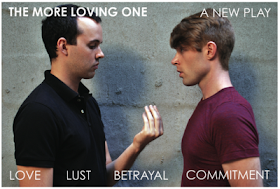 Watching Heinrich bare his love on his sleeve nearly brought me to tears. We’ve all been there, though not necessarily at the point of proposal, we know what’s it like to know when love is truly love. Both Heinrich and Henry are chockfull of gay clichés. From witty one liners and dry sarcasm, it’s not until we see them at their most vulnerable do they become real people. Jimmy Davis as Heinrich was best in the most sentimental moments. His fears of love and commitment were fully exposed in his duet flashbacks with both Lauren and Henry. The breakout star of the play is Preston Martin as Henry. His character had the least investment with the other couple, but without Henry the discussions in the present would not have occurred. And Martin ensured his character was visible. He showcased wit and charm in a lovable way. His facial reactions when he is literally caught in the warfare between Lauren and Matt, smartly arranged by director Craig Baldwin, were priceless. In a sense, he was our way into the play. Make sure you remember the name Preston Martin. Star in the making. Overall, the company of four was superb. Not a single weak link.
Walking into the 1st Floor Theater at LaMama, you instantly saw brick walls. This could be detrimental for a scenic designer in a festival. But Dane Laffrey’s set utilized the space perfectly. If you didn’t know better, you could have believed you were actually in someone’s living room. The architecture of the theater combined with the sleek modern set pieces and niftly hanging roll of paper gave the space character.
For me, the star of the play was the script. It’s witty and smart and filled with heart. Exactly what I look for when I see a play. I’m not made of stone but I rarely emote during a show. The More Loving One got me teary eyed in the final scene. Conley reveals the truth for the characters neatly and not forced in the slightest. I honestly wish I could find some constructive criticism, but I really can’t. I was engaged from start to finish. Still with a week of shows to go, you can call The More Loving One my best bet of FringeNYC 2011.