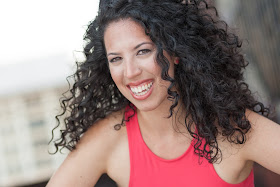 Favorite Credits: Come back to me in 10 years :)

Why theater?: Woooo boy! Theater and story telling have a way of getting to your heart - it uses all parts of your brain- the audience and the actors- and the lessons learned are deeper as a result.

Tell us about Simple Math:? It has live music, a chalk board, and even a little chemistry. And a whole lotta me! But really, it is a lot more than an assault story. It’s an analytical look at the gray areas often considered “complicated”.

What inspired you to create Simple Math?: It was a slow build. First Weinstein fell. The metoo movement. Suddenly there was a new precedent forming. I heard the arguments and was compelled to fill that gap in people’s understanding of trauma-specifically the role it plays in sexual assault, and how it explains a victim’s/survivor’s behavior, both in the moment and post event.

What kind of theater speaks to you? What or who inspires you as an artist?: Very theatrical, engages with unexpected or uncommon subjects- where I feel like I’ve left changed.  Depends on the project. This piece, I was very inspired by Ke$ha’s newest album, Rainbow, Alicia Keys, Amy Winehouse, and the hard sciences :) and NPR or podcasts.

If you could work with anyone you’ve yet to work with, who would it be?: I’d make a musical with Alicia Keys.

What show have you recommended to your friends?: Dear Diary LOL - by a group called Antigravity based in Philly- a devised around young womens’ diary entries from when they were 13. It was a riot! And then struck you with these golden truth gems out of no where. It’s one of the best pieces of theater I have seen in a while.

Who would play you in a movie about yourself and what would it be called?: Stephanie Beatriz- but I’d audition many people - it would be called, "I Laugh" or "There’s Sooo Many Choices."

If you could go back in time and see any play or musical you missed, what would it be?: Maybe  original cast of Fiddler -  don’t know, I’m crazy about new works.

If you weren’t working in theater, you would be _____?: A detective, psychologist, anything in criminal justice.