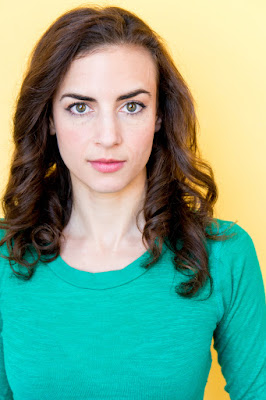 Education: Yes I have lots of this

Favorite Credits: As an actor: wow-I have loved so many of the shows I've been in.  A few notable ones: Christina in Red Light Winter; Sally in You're a Good Man, Charlie Brown; Nora in Coffee and Biscuit, a retelling of A Doll's House where all of my acting partners were puppets; a beautiful Viewpoints-y show I did in college called The Loveliest and Saddest Landscape where I played the wife of the author of "The Little Prince"; and Tzeitel in Fiddler in high school, which was a magical time for all of us involved.  Any show I get to do that I've been gunning for for years: Cabaret, Spelling Bee, The Importance of Being Earnest.  Also other ones!!  V v bad at narrowing it down.

Why theater?: You get the immediate feedback of laughter.  You get to cry in front of people.  Or you can go up and look them in the eyes and whisper in their ears, if you're in the right show.  Because of how it has always made me feel when I see an incredible show-delighted, awestruck, gutted.  I can't get away, really.  I love theatre even when sometimes it doesn't love me back.  It's a little cheesy but perhaps it's a language, like music or movement, and I learned to speak it very young and I just keep communicating through it both intentionally and accidentally.  And because when it's done right, you get a new family every show, which sometimes only lasts until closing but when you're lucky it lasts forever.

Tell us about Wicked Frozen: It's an absurd ridiculous parody mash-up of Wicked and Frozen, with many over-the-top satirical characters who do and say insane things.  But it's also the story of a girl who isn't able to be like everyone else, for better or worse, and whose existing fears are compounded when she is faced with a new obstacle.  We also follow a young woman, the girl's teacher, who is trying to make the best of a bad situation, but like all of us, doesn't always know exactly what to say or do.   Also there is stuff about Climate Change.

What inspired you to write Wicked Frozen?: Toby and I were brainstorming what kind of 15-minute musical to write for the West Village Musical Theatre Festival and our conversation progressed like this: "Let It Go" just won an Oscar à Idina Menzelà Check out her voice in "Defying Gravity" Oh funny, both of those things have I.M. and another female lead who is a blonde named Kristi(e)n What if we combined them?  But I haven't seen either one  Me neither! Let's do it anyway And call it "Wicked Frozen", like we're in Boston=DONE.  We thought it was a pretty stupid idea, so of course we made it, and it turned out really bonkers.  "Wow this is REALLY stupid" is basically how Toby and I know we're on the right track-usually because we can't stop laughing.

What kind of theater speaks to you? What or who inspires you as an artist?: Beautiful, simple, sad, real.  Bittersweet.  I love things that are honest, because we are fed a lot of "happily ever after" and that makes you feel really lonely when it's not what you end up living.  The most recent example I saw is Indecent.  I saw Cock at the Duke, cried my way through it, and went back again. Humans are a MESS!!!  I guess a lot of my inspiration as an artist (as I twirl my mustache and puff on my cigar) comes from the need to escape the whatever-everyone-else-is-doing that I can't get into (Michael Jackson, Cilantro, Game of Thrones), or to validate my own little tiny existence and prove how intelligent, perceptive, beautiful, and hilarious I really am.  Super inspired by adult women who don't take sh*t and are funny and smart and keep doing what they're doing in the face of negativity or rejection, because they are all that gives me actual hope that I won't be taken out with the trash once my hair is gray.   Laurie Metcalfe in A Doll's House Part 2 like YAAAAASSSSSS.

If you could work with anyone you've yet to work with, who would it be?: I geek out over Hedwig and the Angry Inch.  So… I mean if Stephen Trask and John Cameron Mitchell want to give me a call, I won't be mad about it.

What show have you recommended to your friends?: GO SEE LOCAL THEATRE! Support local and indie theatre.  Doesn't matter what show, it matters that there are great actors and show-makers all over the country who don't want to or cannot live in NYC or LA or Chicago, or didn't get to THE BROADWAY for a number of reasons, but who are AMAZINGGGGG and worthy of your love and attention… and financial support in the form of ticket sales.

Who would play you in a movie about yourself and what would it be called?:  Obviously I would play me.  Or like seventeen different non-famous people of all different ethnicities and heights and ages and gender identities and socio-economic background etc etc.  We can't pick a title til I'm dead so title TBD.

If you could go back in time and see any play or musical you missed, what would it be?:  As soon as I read it I immediately regretted not seeing August: Osage County.

What's your biggest guilty pleasure?: Does idling in my car looking at my phone count?

If you weren't working in theater, you would be _____?: Working in music or dance so basically just as bad.  Or maybe I would be a Meteorologist. Or a lawyer, but an alcoholic lawyer because I would end up being good at it but that sh*t would kill me.  Or if there is a job that is learn to speak languages I would do that.

What's up next?:  I go back to LA and am finally going to work on finishing a lot of half-baked things (right Zoe? Right?).  I have two half-written plays that have been on the shelf-one about depression and one about people who are not good at dancing.  I have like FIFTY partially recorded songs that I have been too shy to release, but it's time to open those soul-baring floodgates and eventually play live with other people (which some people call "starting a band"). My comedy duo with Bethany Nicole Taylor, "Catmagic" (@wearecatmagic), has shot multiple unfinished videos, so that's on the docket.  I am also gonna dive back into sketch and character comedy, live or video, hopefully both.  After that, I will become very very rich and famous and you can come to my pet-cute-animals party. [If you're reading this a while after it comes out, please send me a message to make sure I'm not just dressing up in different outfits and checking Instagram.]