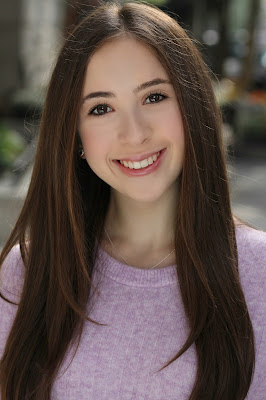 Why theater?: I love theater because it allows you to take risks without the fear of being judged. You are also part of a family; the cast and crew all bond in such a special way. Finally, there is nothing like the excitement  you get preforming in front of a live audience!

Who do you play in Peace, Love, and Cupcakes: The Musical?: I play Kylie Carson based on a character I actually created in my children's book "Peace, Love and Cupcakes." Kylie is different; she's quirky and she doesn't fit in easily in middle school. She loves monster movies and kids call her a freak. She becomes the target of the mean popular clique and has to learn to be true to her self and own her individuality. It's what makes her special.

Tell us about Peace, Love, and Cupcakes: The Musical: Peace, Love and Cupcakes is more than just a musical; we're creating a movement. We are empowering kids to take a stand against bullying. It's the biggest monster kids face today.

What is it like being a part of Peace, Love, and Cupcakes: The Musical?: It's all been so surreal! First the book, now co-writing and acting in the musical in NYMF. I know we can make a huge difference in kids' lives with this show. We're really proud, all of us, to be a part of it.

What kind of theater speaks to you? What or who inspires you as an artist?: Lin Manuel-Miranda inspires because he writes and stars in his own shows. And he's also a powerful catalyst for creating theater that empowers people.

Any roles you’re dying to play?: Zoey in Dear Evan Hansen. I've been singing a lot of her songs in cabarets. She's a really interesting character to explore mentally and emotionally.

What’s your favorite showtune?: "Dear Theodosia" from Hamilton. The harmonies give me chills every time.

If you could work with anyone you’ve yet to work with, who would it be?: Lin Manuel again. I mean wouldn't a collab with him be a dream come true?

Who would play you in a movie about yourself and what would it be called?: I'd play myself if I could! It would be called "One Little Voice" since I started out writing when I was only 8 years old!

If you could go back in time and see any play or musical you missed, what would it be?: The original cast of Miss Saigon. I loved the revival and wish I could have seen the original with Lea Salonga.

What show have you recommended to your friends?: Dear Evan Hansen. It's brilliant. I'm a fansen.

What’s up next?: NYMF and then who knows. Hopefully Broadway one day!