Comedy is subjective. What's funny to one may not be funny to another. With comedy being so broad, an audience is truly the litmus test to discover if something is funny. In Mike Wirsch's intrusively absurd The Curse of the Babywoman, silly fodder and baffling jokes fill the two-act comedy. Be warned, this style of humor is certainly not for everyone. The crazy comedy follows the cartoonish Francisco Sputum as he stumbles into a tavern after a recent sighting of the infamous Babywoman. Wrapped up in an abundance of recurring jokes, many of which don't land the first time, The Curse of the Babywoman is unlike anything you've seen before. Yet it wants to be a comedic steampunk gothic thriller. It's evident that this play will land if it's to your taste. But is it possible that Wirsch's brand of comedy was too smart for this cast? For some reason, there was a massive disconnect between page to stage. Though time and location seemed to shuffle often (Bob's Big Boy anyone?), overall, the accents were not strong enough to be carried through. Going neutral may have added clarity in the comedy. Perhaps defining this world would benefit Wirsch in the long run. 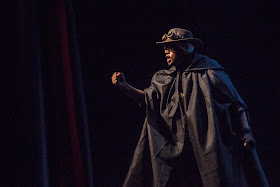 The Babywoman ensemble were game to play, even if it meant throwing puppies out of trees or interacting with straw people. As Philomena, Sarah Misch was the sole performer to grasp the rhythm of Wirsch's comedy. Misch was able to turn from ingenue to diva on a time. Taylor Pedane had a tough task of leading this play. He tried to grasp the absurdity of playing the straight man of the sketch while still engaging in the style.
Director Olivia Hartle kept the energy high from start to finish. She proved what a potential big budget production could be. The inclusion of the shadow puppets, created by Wirsch, was a nice touch that could have gone even further. It was a nice visual gag. The steampunk inspired costumes by Sean Pollock were a nice touch. Just look at Nimrod Rodham Rodman's attire. It elevated his character.
From a score of kid songs to a "Blucher"-esque bit, the moral of The Curse of the Babywoman is that if a recurring joke doesn't work the first time, the audience won't buy it the twentieth time. Mike Wirsch is a smart writer and that should be noted.
Michael Block at 2:43 AM
Share
‹
›
Home
View web version