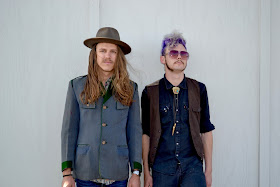 If you went looking for a clean piece of theater, you would be greatly disappointed at Sex, Cynicism, and Other Small Miracles. What you will experience is a theatrical concert hybrid that mixes spoken word with a hipster rockabilly vibe. Written and performed by Lachlan the Bray and Garrett Riley, this evening is nothing short of energetic. Lachlan the Bray is billed as the Australian Country Boy while Garett Riley as the Urban Vagrant. Though hopeful extensions of themselves, these personas lead the audience through three acts, and a prologue, of thematic poetry and rock and roll. Thankfully, the team put a title list in the program to help guide the evening, though you would figure out the shifts as each set had a new costumed look. There was a clear curation to the piece but the trouble is that for the majority of the audience, this is the first time the words are hitting their ear. Clarity was not a friend of Sex, Cynicism, and Other Small Miracles. Especially in song. That’s not to say the material wasn’t captivating. It was just difficult to grasp.
Director Mia Romero helped shape the night by attempting to keep the energy up. But there certainly were some dips. The interludes between sets allowed the musical assistants, Mark Goodwin on drums and Alex Farrell on bass, to get a moment in the spotlight. But the reality is that their solos went on a bit too long. Whether it was to cover up the costume change or to give Lachlan the Bray and Garrett Riley a breather, it needed to be shrunk.
Sex, Cynicism, and Other Miracles is an interesting selection for a mostly theatrical festival. Yes, it’s something unique but if from a production standpoint, there needs to be something else to string the night along.
Michael Block at 4:38 PM
Share
‹
›
Home
View web version