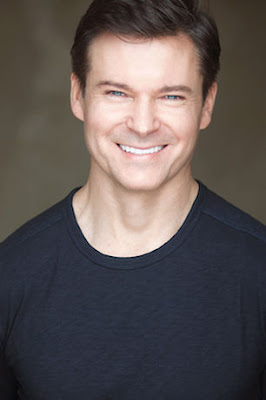 Hometown: That’s tricky…I moved 18 times before college….but I will say I was born in Jersey!

Education: BA in Theatre from Muhlenberg College, and 2 year program at The William Esper Studio

Select Credits: Dancer in John Waters’ “Hairspray”, Nick in the cult classic horror comedy, “There’s Nothing Out There”, Co-host of “Daily Shot with Ali Wentworth” for Disney.

Why theater?: I left acting in the 90’s to pursue a film editing and digital production career…and I returned to study acting, recently graduating last June. So theatre is really my training ground to really solidify what I’ve been studying…and I enjoy the thrill of live theatre.

Who do you play in Who Mourns for Bob the Goon?: I play Jonathan, the Therapist.

Tell us about Who Mourns for Bob the Goon?: Basically, its a story about a group of Iraqi War Veterans who all suffer from various levels of PTSD. Jonathan, has created a method whereby these vets can disassociate from their battlefield personas and associate that with a comic book character. His dream is to have an army of comic characters that he controls, allowing these soldiers to exist as one person in the field and another at home. The title character Bob, is having trouble making sense of the program…and winds up derailing the plan.

What is it like being a part of Who Mourns for Bob the Goon?: I’ve been with this project since some of the early readings last year, so its an amazing process to see how far we’ve come.

What kind of theater speaks to you? Who or who inspires you as an artist?: What or who inspires you as an artist?: I try to see as much theatre as I can. I love drama, new and old…I’m inspired when I see actors sharing who they are and revealing intimate parts of themselves…I love seeing risk takers…actors who experience moments so truthfully that I feel like I shouldn’t be listening….

Any roles you’re dying to play?: I’d like to do a production of Mother’s and Sons and I’d love to tackle The Lyons.

What’s your favorite showtune?: Not really a musical theatre kinda guy…but “Rent” really stayed with me.

If you could work with anyone you’ve yet to work with, who would it be?: I love so many actors…but I’d to work on a play with Jayne Houdyshell (who won a Tony for The Humans)

Who would play you in a movie about yourself and what would it be called?: Jason Bateman - "Let’s try this one more time…"

If you could go back in time and see any play or musical you missed, what would it be?:  Streetcar with Brando…really anything with him…I’d also like to have witnessed Laurette Taylor..I’ve read that she was magical onstage.

What show have you recommended to your friends?: Currently running? The Humans

What’s up next?: I’m auditioning…There are a couple plays that have yet to commit to dates yet…but I think more theatre. I also filmed a guest spot on a new sitcom called “Nightcap” that starts in the fall.
Michael Block at 8:03 PM
Share
‹
›
Home
View web version