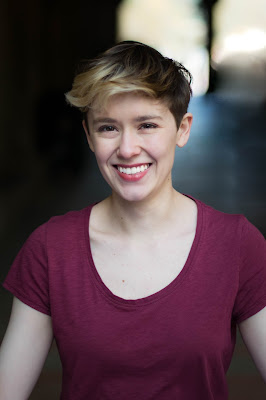 Select Credits: Desdemona in Othello and Prince Hal in Hearts of Gold (adapted from the Henry IVs) with Easy Leap Theatre Company.

Why theater?: Because I didn’t make it onto any sports teams in school.

Who do you play in Much Ado About Nothing?: Claudio, and I'm also the production dramaturg.

Tell us about Much Ado About Nothing: It’s pretty much everyone’s favorite comedy, with good reason: it has one of the most charming and likeable sets of lovers, and one that reads much better in contemporary terms than many Shakespeare lovers do. But I’m playing one of the other set.

What is it like being a part of Much Ado About Nothing?: It’s fun to get back to encountering Shakespeare from a performance angle after spending some time exploring mostly from a scholarly perspective.

What kind of theater speaks to you? What or who inspires you as an artist?: I’m bored with naturalism. I want to light every family living room drama on fire. I love anything that challenges the way we see the world, that forces an audience to play by its rules, that isn’t afraid to be epic. I just flew to Toronto to watch all nine hours of Rona Munro’s James Plays, and right now there’s probably nothing in the world I love more than the passion, ambition, and skill of those plays.

Any roles you’re dying to play?: Not dying to, since I’m not really an actor anymore, but I’d like to play Malcolm in Macbeth. But only if I get to wear a kilt.

What’s your favorite showtune?: Oh my God, I can’t pick.

If you could work with anyone you’ve yet to work with, who would it be?: Samuel Barnett. Any day now, I’m sure.

Who would play you in a movie about yourself and what would it be called?: "Cute or Sad: The Hailey Bachrach Story". I would be played by a Claymation puppet of myself.

If you could go back in time and see any play or musical you missed, what would it be?: The Booth brothers in Julius Caesar, 1864. Or Cate Blanchett’s Richard II.

What show have you recommended to your friends?: Currently running? The Crucible.

What’s up next?: Nothing yet! Anyone hiring?