Review: The Golden Smile Made Me Smile!

The Golden Smile, written by Yaakov Bressler, is a witty dark comedic musical farce. Set in the 1950’s, The Golden Smile is absurdly vulgar and hilariously light all in one. Directed by Joey Stamp, this psychological musical had a lot of high points to be commended. From the start there is a lot going on. You are in a mental hospital with 7 people with varying degrees of disabilities and physical limitations. All of the characters have their own defined personality and pick on one another accordingly. It is clear to the audience from the start who are the alphas and who are the betas. The Golden Smile is about a group of mental patients being bogged down by their warden, played by JeVon Blackwell. In danger of his physical threats and of losing their most prized possession, their wreck room, the gang sets out on the daring task of creating a play. By the end, they all realize their true purpose. 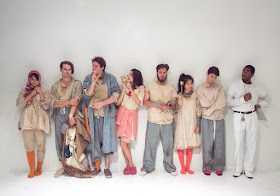 Joey Stamp did a fabulous job in defining each character. It would have been easy to throw 7 actors on a stage with pretend disorders and not define them. It was clear that the character work was important to the writer and director. However; out of the 7 patients on stage, only 5 were really used to their fullest potential. The Critic 1 and Critic 2, played by Jody Hinkley and Yasmin Schancer, were underutilized and therefore seemed a bit unnecessary on stage. The other 5 actors were the ones creating the plot and driving it forward. If a character has no change from beginning to end and is not a driving force in the script, than there is not a real need for that character accept to pull focus.
The first song is sung by Loathing Actor, played by Robert DiDomenico. This was thrilling since at this point everyone was mostly unaware that the show had musical elements. DiDomenico did a fantastic job telling the audience why he was smarter, better and shouldn’t be in this mental hospital. The satire and irony is what set this show in a positive motion. The Director, played by Amanda Mason, was a force to be reckoned with as her character screamed her way to the top…literally. There was a lot of screaming from the start which made it hard for the cast to keep the momentum up. The energy started at a 10 from the beginning and ended at an 8. It would have been more fulfilling if Mason gradually took control and grew stronger physically and vocally throughout the show to gain power. Her journey was a bit one note because of the stagnant nature of her yelling constantly. The writer, played by Andy McCain, stole the show. McCain created a physicality that was unlike any other. He worked on a stuttering speech pattern that created empathy and awareness of his illness. His character also had the biggest journey and change from beginning to end. It was a joy to watch the writer’s transformation from being a cowardly stutterer in the corner to a well-articulated character in a play within a play. It was a commentary on the power of theater and how it can transform lives.
The Paradise Factory is a small bleacher seating style black box. The stage was utilized to its fullest potential. The space didn’t feel too big or too small, but just right for this insane comedic musical. The lights were designed to take the audience from sterility of the mental hospital to the physical threats coming their way to their own world when creating the play. And the lights did just that. It helped progress the story forward and aloud the audience to share in the characters emotions.
The Golden Smile definitely made me smile and was one of the better shows part of the Planet Connections Theatre Festival. The actors left their hearts and energy on that stage. It seemed like a project full of passion from every member involved. I recommend this light hearted yet serious commentary on society of a show to anyone looking for a good time.
Michael Block at 1:05 PM
Share
‹
›
Home
View web version