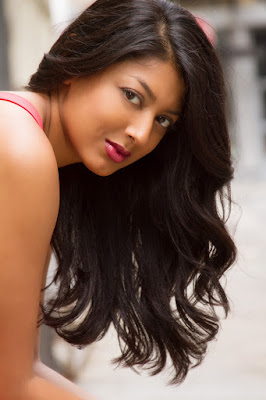 Select Credits: Bunty Berman Presents… (The New Group), Rachel (The Wild Project), I Like to Be Here (The New Ohio Theatre), Passing Strange and the Displaced Hindu Gods Trilogy- originated the title roles in The Chronicles of Kalki and Shiv (all at Mixed Blood Theatre)

Why theater?: Robert Prosky once quoted an anonymous source, “the moment of not knowing has the greatest potential for creativity.” Whether you’re on stage or in the audience, there’s a moment right before a show starts that’s filled with anticipation- equal parts terror and exhilaration- of the unknown. ANYTHING can happen up there once the lights come up. I love that moment.

Who do you play in Coping?: I play Jessica Evans, the big sister grappling with her own demons as she tries to put together the perfect funeral for her little brother.

Tell us about Coping: Coping is a dark comedy about the absurdity of death. It charts the week after Connor Evans’ suicide, as his family and friends navigate the roller coaster of emotions that come with grief. So…it’s super light hearted! Kidding. But it really is an important exploration of the complexity of death, which has become almost a taboo topic of conversation these days.

What is it like being a part of Coping?: I love it! And it’s also really hard. This story is so close to my heart, and there are times when I have way too much in common with Jessica. Many cookies were needed to get through rehearsal the other day (thank you, Schmackary’s). But it’s fantastic to work with a team that’s so open and willing to dive in and tackle things that aren’t so pretty.

What kind of theater speaks to you? What or who inspires you as an artist?: I love new plays and the wonderful people who write them. The collaborative process that’s part and parcel of the new script workshopping process fuels my creativity and is the very definition of fun. Plus, getting to craft a character from scratch, with no limits or preconceived notions, is perfection. Also…thank you to the beautiful people who think outside the box when it comes to casting.

Any roles you’re dying to play?: Honestly, nothing specific. Broadly speaking, I’ve always been drawn to misunderstood characters- the “villains” of the piece. I enjoy exploring what they’re hiding from everyone else. Is anyone looking for their Professor Moriarty???

What’s your favorite showtune?: If by “favorite” you mean “what’s been stuck in my head all day,” currently it’s “Waiting for Life” from Once on This Island. I <3 that show to pieces.

If you could work with anyone you’ve yet to work with, who would it be?: Oh man, my list is way too long to write here!! But the blurt-out-before-I-think-too-much-about-it answer is Bernadette Peters. I adore and admire everything about her. I watched the VHS version of the original Into the Woods over and over again as a kid and her Witch played a huge role in my desire to become an actor. Also I named my basil plant after her. Bernadette Basil. She’s adapted to NYC apartment life well!

Who would play you in a movie about yourself and what would it be called?: If I can’t play myself, I’d be on the hunt for a love child combo of Archie Panjabi and Alyson Hannigan for a film subtitled “Running Towards My Pillow.” The actual title is TBD.

If you could go back in time and see any play or musical you missed, what would it be?: …can I please see Bernadette Peters live in Into the Woods?!?!

What show have you recommended to your friends?: Hand. To. God!! Also, it closed in New York a while back, but I told everyone- friends and strangers alike- to see Nirbhaya at the Culture Project. It was hands-down the most honest, moving, and gut-wrenching piece of theater I’ve seen in a long time. So when it comes back – SEE IT.

What’s your biggest guilty pleasure?: Popcorn. Except I try not to feel guilty about eating food (I love food. All food). So…oh. Yup. You know those awful B-movies that air on like the Sy-Fy channel?? And those kung-fu movies that have been badly dubbed into English?? Throw one of those up on the screen, hand me a large bowl of popcorn, and watch as I turn into a giddy child.

What’s up next?: Artistically, I’m open to anything the universe throws my way! Though it’s been quite a busy summer, so I’m strangely looking forward to getting back into the audition game. Personally, I’ll be running the NYC Marathon this November 1st (my first time running 26.2 miles all at once), and training is getting intense. Please send positive, no-injuries-allowed vibes my way!