Dating in the 21st Century in New York City is hard. Nothing new about it. And yet there's another Fringe musical about the same thing. In #LoveStory, the dating lives of a bunch of twenty somethings is set to a pop rock score. With music by Mark Oleszko, lyrics by Bethany Mayes and Oleszko, and book by Mayes and additional book by Sophie Frankle, the musical comedy is a sad reminder how ridiculous our dating habits have become. The musical begins with Zoe, a 21st Century Carrie Bradshaw, who laments about her dating woes. Aside from her fwb (or friend with benefits), Zoe can't find love. She vows to find a man and be in love by the time the next Valentine's Day rolls around. But this musical isn't just about Zoe. Oh, no. The plot gets complicated as we also track the lives of best friend Becca, who is pining for her geeky ex, Evan, who is an emotionally abusive relationship with a guy, and Katie who ditches Mr. Perfect after he proposes to her on V-Day. Their woes are common and relatable but with so many character arcs to track, it just gets messy. The story should focus on Zoe and not spend as much time with the others. In fact, Becca and Katie could be combined to create one character and Evan could be eliminated all together, and still there would be excess material to chop away. With topics ranging from friends with benefits to girls dating gay guys to online dating, everything gets covered. Mayes then introduces us to secondary characters including drag bar owner Holly, the endless supply of Tom, Dick, and Harrys the girls date, and the random ensemble member who breaks the fourth wall for an ill-timed stand up set. It's very possible the problems with the script can be blamed on too many cooks in the kitchen, as director Todd Ritch also gets a credit as script supervisor bringing the writing credits to four. If this story is important to tell, finding a stronger and more unique way to sell it is essential. The music has some catchy numbers but none are walkaway worthy.
The company of #LoveStory ranges from stellar to drab. As Zoe, Tara Llewellyn pours her heart and soul into the role. Llewellyn has nice comedic timing and one helluva voice. Llewellyn is filled with great potential. The other strong player, despite the lack of stage time, is Carter Easler. As Tim, Easler fits the adorable puppy dog profile. Easler is boy next door charming and charismatic with a solid voice. When it was finally his turn to shine, the stage seemed to illuminate. Lana Gallo as Becca got to be goofy and funny and was a good fit to be Zoe’s best friend. Daniel Jackson as Cal epitomized the trashy fwb, though the character’s sudden Tibetan calling was random. 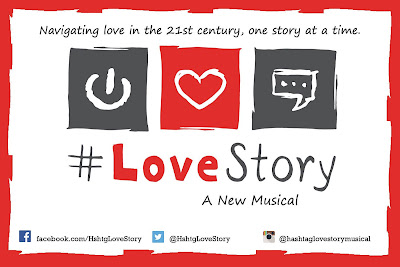 Having fun and entertaining is one thing, but attention to detail is essential. Director Todd Ritch seemed to forget about that element. When it comes to musical theater, magical things are allowed to happen, but there are still rules to the world you create. The overstuffed script is filled with characters that have relationships with one another. Throwing these characters with actual arcs into musical numbers they have no business being present in, in their base costume to boot, throws off the rules. The largest culprit was Ritch’s use of Carter Easler. There is no question Easler was one of the more capable triple threats in the company, but Tim can’t just show up in a song and interact like he’s a stranger. Additionally, Ritch’s use of the ensemble was distracting. Sure, bars are crowded and busy but the stage silence and active background work was more of a detriment. The musical staging and choreography by Ritch, and Talia Dooz and Eddie Maldonado was messy, especially with a tight stage filled with a six piece rock band. And let’s not forget about those curtains. Ritch utilized the curtains of Theatre 80 to hide scene shifts. Whether it was due to operator error or poor mechanics, the curtains brought a squeaky squeak, as well as never quite being opened in the right spot. And boy was it awkward for the cast to fight against those curtains. Musical director Matt Bennis and composer Mark Oleszko incorporated a rock vibe for the music. But as a whole, there was something terribly off about the orchestrations. Bringing in a violinist is a nice idea. Except when the violinist is drowned out by the overpowering electronic strings coming from the keyboard. The level on keyboard 2 was so high, the synthesized sound and drums were the only things you heard at times.
#LoveStory is clearly a labor of love. There is always a lot of love bringing your work to life. But #LoveStory needs to go back to the drawing board.
Michael Block at 1:57 AM
Share
‹
›
Home
View web version