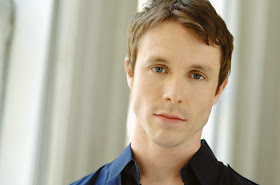 Why theater?: Because shit could go wrong at any minute.

Tell us about The Cloud: A modern farce for the technological age?  I’m not sure who said it, but somebody on our first day of rehearsals called it a “Farce Without Doors.”  I thought that was a good description.

What inspired you perform in The Cloud?: I’d always wanted to do something with Slant Theater; I’m a huge fan of those guys.  I think I’d even mentioned this to Matt Dellapina (Co-Artistic Director) a few weeks before the auditions.  “Matt, why don’t you guys put me in something?”  The play is different from what I usually get cast in.  I haven’t gotten to do a comedy/farce-type play for a while now.  I’m also a playwright and I’ve been focused on that for the past year.  Oh yeah, and I had a baby too.  So there’s that.  It just felt like the right play to do after being away for a bit.

What kind of theater speaks to you? What or who inspires you as an artist?: I tend to lean more toward darker and weirder stuff. Seeing live music at strange DIY spaces.  My favorite concert venue is Death By Audio in Williamsburg.

If you could work with anyone you’ve yet to work with, who would it be?: I have a play that needs to be performed by Michael Shannon and Paul Sparks.

What show have you recommended to your friends?: Besides The Cloud?  I haven’t been able to stop thinking about Your Mother’s Copy of the Kama Sutra by Kirk Lynn, which is currently at Playwrights Horizons.  In college, when I was first getting into theater, Kirk Lynn’s plays were a huge inspiration for me (we’re both from Austin), and I think this new one of his is very moving and brave.  Also, I know it isn’t happening yet, but I am a huge fan of Clubbed Thumb’s Summerworks, and I’m psyched for the new Jenny Schwartz play.

Who would play you in a movie about yourself and what would it be called?: People always say that I should play Sam Rockwell’s brother in a movie.  So maybe him?

What’s the most played song on your iTunes?: I haven’t stopped listening to Parquet Courts’ album Light Up Gold, since it came out last year.  And, it’s only been out for a few days, but the new Ex-Cult album.  They’re a punk band from Memphis.

What’s up next?: Taking a break in June.  My fiancée and I are going to spend a few weeks on Squam Lake in New Hampshire with our baby.  And then in September I start the Clubbed Thumb Writer’s Group.  It’s my first formal writer’s group, so I’m looking forward to that.
Michael Block at 12:08 PM
Share
‹
›
Home
View web version