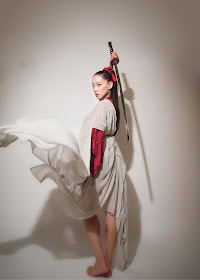 Why theater?: Because I enjoy it.

Tell us about Deadly She-Wolf Assassin at Armageddon!: This is a very dramatical and powerful martial arts theater show with dynamic and beautiful live music which you've never seen anywhere!

What is it like being a part of Deadly She-Wolf Assassin at Armageddon!?: It's my pleasure. I'm having a wonderful time and it is a great learning experience.

What kind of theater speaks to you?: Martial Arts Theater, Dance Theater and Experimental Theater.

What or who inspires you as an artist?: Yuen Woo-Ping (is a Chinese martial arts choreographer and film director)

If you could work with anyone you’ve yet to work with, who would it be?: Yuen Woo-Ping

Who would play you in a movie about yourself and what would it be called?: I don't know ... I'd play myself and it be called "波瀾万丈" -stormy drama-

What’s your biggest guilty pleasure?: Watching kung fu movies or practicing too much!

What’s up next?: I have a show coming up with Japanese Drum company called Taiko Masala at the Widow Jane Mine, Rosendale NY on July 14th. We perform in their beautiful cave. (www.centuryhouse.org)
Michael Block at 12:25 PM
Share
‹
›
Home
View web version