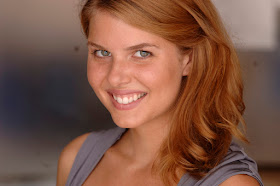 Education: American Academy of Dramatic Arts. I got connected with The Amoralists because Nick Lawson saw me in Dracula and put my name in when they were looking to do Bring Us the Head of Your Daughter. The rest, as they say, is history.

Favorite Credits: Playing drunk is always fun. I was in love with Jackie from the moment I read the sides from Daughter. Working on HotelMotel was amazing. Getting to be intimate with Byron Anthony every night is something I’ll never forget. And Daniel Aukin, our director on The Bad and the Better, can do no wrong. I think I’m in love with him.

Tell us about Collision: It’s about three college students and a professor, who are all seeking to fill a void. One of them seems to have the answers, but in the end is questioning things himself. My character, Doe, has changed the most since Lyle’s original version. One of the challenges of the process has been working with our director, David Fofi, to find the balance between being a pure, young girl and an intelligent college student.

What inspired you to participate in Collision?: I was out of town doing a show at Linda Lavin’s theater in North Carolina, and was contacted by [Amoralists Ensemble member] Jordan Tisdale, asking me if I was ever going to come back to New York. Shortly thereafter I got an email asking me to play Doe and we started doing readings of the show. It was maybe 6 readings before we actually started putting it on its feet.

What kind of theater speaks to you? What or who inspires you as an artist?: Edward Albee has always inspired me. The Goat, or Who Is Sylvia? is one of my favorite plays. Working with The Amoralists constantly doing original works is really inspiring because to originate a role is really challenging and it’s a collaborative process. That’s the best part about it, you know you’re part of a team. It’s amazing working on an original script.

If you could work with anyone you’ve yet to work with, who would it be?: I would love to work with Matt Pilieci and William Apps. I’ve always admired their work and they’re two of the people from The Amoralists who I’ve yet to really work with. Also, Sam Rockwell and Michael Shannon because they’re fly. And of course, I want to work with muMs. All the time.

What shows have you recommended to your friends?: Jerusalem. It was fantastic. The performances were amazing. The energy of Mark Rylance is something I’ve never seen before. Sleep No More because it’s a show that you can take whatever out of it that you want to. Really, you’re a participant in it, which is so cool. And I love that it’s such a secret. That’s fun. I like theater that takes you by surprise.

Who would play you in a movie about yourself and what would it be called?: I’m in need of some work, so I’d love the role! It would be called "The Anna Stromberg Story" on the ION Television network.

What’s your biggest guilty pleasure?: I’m reading "It" right now and it’s awesome. Is that a guilty pleasure? I feel like I should be reading something else. I don’t have a television, but I’m sure I would be watching ridiculous cooking shows all day if I did. And I like walking by pet shops because puppies make me happy.

If you weren’t working in theater, you would be _____?: I’d probably honestly be smoking cigarettes and drinking wine all the time. But career-wise, I’d love to do glass blowing or be a sound mixer for films. Or a deep-sea diver. But that would be scary. I’d just have to get over it.

What’s up next?: The answer to everything is cigarettes and wine. Red wine. None of that rosé or white wine, I can’t handle it. Hopefully muMs and I are going to be making a movie. Me and muMs, baby!
Michael Block at 2:43 PM
Share
‹
›
Home
View web version