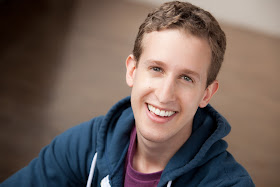 Why theater?: My family took me to lots of theatre growing up, and I knew from an early age that I wanted to make it my life. I saw every national tour that came through Cleveland. I put on shows with marionette puppet theater. I used all the sheets in our house to hang curtains and put on my own plays. I was totally entranced by the magic, the storytelling, the wonder it instilled in me. And I loved quick-changes.

Tell us about Lysistrata Jones: Lysistrata Jones is a new musical by Douglas Carter Beane and Lewis Flinn, directed and choreographed by Dan Knechtges. Here are the press notes, so I don't have to type anything else:  "The Athens University basketball team hasn't won a game in 30 years. But when spunky transfer student Lysistrata Jones (Patti Murin) dares the squad's fed-up girlfriends to stop 'giving it up' to their boyfriends until they win a game, their legendary losing streak could be coming to an end. In this boisterous new musical comedy, Lyssie J. and her girl-power posse give Aristophanes' classic comedy a sexy, modern twist and take student activism to a whole new level."

What is it like being a part of Lysistrata Jones?: It's the time of my life. Every night it's like we're throwing a party on the stage of the Walter Kerr. So the challenge is to bring yourself to the party... and STRETCH. Woof! it's such a physical show, and gives you one hell of workout. Also, I love my cast. Especially my boys on the basketball team: Josh Segarra, Alexander Aguilar, Teddy Toye, Ato Blankson-Wood. We feel like a real team out there. We've got each other's backs, we work together, and that's the real thrill of the show. Being on this kickass team, busting ass together every night. Plus, it is such an honor to be making my Broadway debut. I dreamed about this as a kid... didn't dream about the basketballs... but we give and take... The point is - to make my Broadway debut in such a joyful show is monumental to me. I will never stop being grateful for this opportunity.

What kind of theater speaks to you? What or who inspires you as artists?: All theater speaks to me. The question is whether or not I listen. And I have some attention problems. For instance, when I was a baby, my mom would call my name, and I wouldn't respond. She took me to the doctor to check my hearing. The doctor had to break it to her that I could hear perfectly fine. I just wasn't interested in what my mother had to say. Now, my mother is a wonderful woman. But let's just say that I don't like dating other Jews because one Jewish mother is enough. Next question, please.

Any roles you’re dying to play?: The roles I want to play are roles that have not yet been written. Or Fanny Brice in Funny Girl. Check out my version of "My Man" on YouTube.

What’s your favorite showtune?: I like songs by Harold Arlen because they are timeless and can be vocally interpreted in so many different ways. And yes, I know that I am coming off in this interview like I'm doing a cabaret at the Cafe Carlyle. ...But seriously if you know the booking agent, let's talk.

If you could work with anyone you’ve yet to work with, who would it be?: Frances Conroy. Based on her work in "Six Feet Under", I think she's one of the best actors working today. I know we're not supposed to be result-oriented, but bitch can drop a tear.

Who would play you in a movie about yourself and what would it be called?: I would play myself, and it would be called, "Life is Not a Fairytale: The Fantasia Barrino Story."

What show have you recommended to your friends?: Sons of the Prophet. It's the best play I've seen in months. Honest, hysterical, heartbreaking, and it really spoke to me - the themes of growing up and finding yourself reluctantly becoming an adult... I got that.

What’s up next?: Who knows! I'm gonna keep going Lysistrata Jones until... I guess until we don't do it anymore. Hopefully that won't be for a long while. And then? I'd love to do a play next. After all this dancing, my legs need a break.