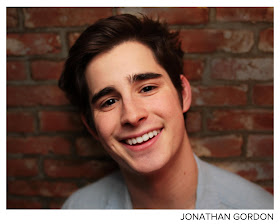 Why theater?: It communicates so effectively. People don't like to feel very often, or at least they don't always have the opportunity to get in touch with themselves. Theatre can create a setting where both performers and audience-members can do that, which is really exciting to me. It's the immediacy of it all. And c'mon, it's goddamn entertaining!

Tell us about As the Boat Approaches: It's a new play, written by
Justin Kurtizkes, about two college-bound kids who get stranded on a desert island. The play is fashioned in the style of long-form improv comedy, and it features warriors, sailors, dinosaurs, the creation of the universe - you know, pretty everyday stuff. There's no set and no props, just two actors on stage and your imagination. A Huffington Post review of the Los Angeles production said that "If you're in New York this month, do your imagination a favor and try to catch it."

What is it like to be a part of As the Boat Approaches?: It's honestly
the most exhausting play I've ever worked on. The play oscillates so intensely between comedy and drama, it's always a challenge to maintain control of the material. Because it's in the style of improv, though, it's also one of the most liberating pieces I've ever worked on - my co-actor and I are constantly surprising each-other every time we perform. The two of us, along with the writer/director, were all in an improv troupe at Brown, so it's great to be able to work on material like this outside of college.

What kind of theater speaks to you? What or who inspires you as an artist?: It can be big or small, doesn't really matter to me - I just want to see something where the actors are really playing with one another and being genuine about it. So, good theatre, I suppose.

What is it like to be a part of FringeNYC: My director and I stopped by the FringeNYC opening party last night, and it was so crazy to be reminded of how many people are involved in this festival- you kinda forget what's going on outside of your show when you're trying to get sneaked into NYU rehearsal spaces everyday. It's daunting, but also so exciting. I ended up just hoarding all these promotional postcards because all of the shows look so exciting.

Any role you’re dying to play?: Thom Pain in Thom Pain (based on nothing).

What show have you recommended to your friends?: I'm pretty sure everyone has seen it by now, but if you haven't, Sleep No More is pretty mind-blowing.

What’s up next?: Getting a part-time job, maybe an apartment? You know the drill. I developed a solo show during my final semester at Brown called The Real Realness of the Real Orange County - it's a piece all about growing up in the O.C., and I'd love to be able to perform it here. It can be so interesting talking to people on the East Coast about SoCal, I think it could be fun for people see.