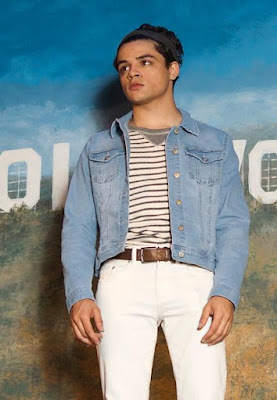 Hometown: I’ve moved around a lot during the recent years so I don’t have one set hometown. Born in Washington Heights, raised in Bushwick, moved out to Bay Shore, Long Island, currently in Dix Hills, Long Island.

Why theater?: It was the most accessible form of art to me growing up. Theatre is a way to find yourself. Even if it isn't for you, it can open you up to various other opportunities as well.

Who do you play in Wink?: Wink!

Tell us about Wink: Wink is a timely piece of theater revolving a homeless and traumatized gender questioning teenager, and Dario Villanova, an ex-A list actor doing B movies, both down on their luck in Los Angeles. Their kindred spirits bond over doo-wop music and an effort to forge a heartfelt and unconventional love story of surrogate father and child.

What is it like being a part of Wink?: It’s been a rollercoaster of an experience. Definitely the biggest challenge I’ve faced thus far as an actor trying to tell the story of this fragile being with complete authenticity.

What kind of theater speaks to you? What or who inspires you as an artist?: Unconventional theater. Theater that doesn’t hesitate to provide a new experience for audience members that are both avid theater goers and newcomers alike. As an artist, names like Diego Luna, Gael Garcia Bernal, and Oscar Isaac are all huge inspirations to me, all whom are hispanic and began at the theater. They really set the bar for me.

Any roles you’re dying to play?: ANY role in a Stephen Adly Gurgis play. He’s my favorite.

What’s your favorite showtune?: “Heaven on Their Minds” from Jesus Christ Superstar.

If you could work with anyone you’ve yet to work with, who would it be?: That’s a hard one, there’s so many! I’ve always wanted to work with Jake Gyllenhaal. He’s an all around talent.

Who would play you in a movie about yourself and what would it be called?: Either Jay Hernandez or Rami Malek. I don’t think I’ve experienced enough of life to come up with a title yet.

If you could go back in time and see any play or musical you missed, what would it be?: Al Pacino in Does a Tiger Wear a Necktie?

What show have you recommended to your friends?: Lynn Nottage’s new play Sweat.