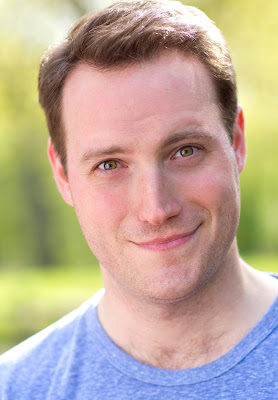 Why theater?: It’s corny sounding, but there’s a connection to people you can’t have any other way between the audience and the other performers. It’s pretty amazing and special…at least when it all comes together and clicks. And you really are unlimited in the kind of stories you can tell and the roles you can play. Plus it pays REALLY well. ; )

Tell us about Walken On Sunshine: It’s a fast paced comedy (think The Muppets meets Mel Brooks) about an anxiety-ridden filmmaker who accidentally lies to investors about having Christopher Walken in his movie. He and his filmmaking team get into one mishap after the next while trying to find Walken. It’s not only a love letter to Walken but moviemaking as well, as there are numerous cinematic tropes throughout the show. There’s even a live pianist who plays a score underneath.

What inspired you to write Walken On Sunshine?: I was working on a film project about ten years ago when I read this article on how Christopher Walken accepts almost every role he’s offered because he just loves to work. I joked with my writing partner that we should just get Walken to work on our film and we’d be set. That joke gave me an “Ah-ha” moment and the premise of the play was born. It initially started out as a screenplay but after numerous variations of the script I decided it would be fun (and cheaper/easier) to make it into a play.

What kind of theater speaks to you? What or who inspires you as an artist?: I am a fan of contemporary theater that finds unique ways to tell a story that can still be relatable to the average patron. The Woodsman, which recently played at New World Stages, was a great example. There was such beautiful and creative work from everyone involved and it’s something you’d think wouldn’t get the chance to find its way in a commercial setting. But it did and deservedly so. People like Bill Irwin and Mark Rylance inspire me. They are totally in control of their instrument (vocal and physical) but make it seamless. They are also wonderful at finding the comedy in tragedies and the tragedy in comedies. I’m a sucker for pathos!

If you could work with anyone you’ve yet to work with, who would it be?: As you’d gather from my previous answer, Bill Irwin and Mark Rylance would be a dream to share the stage/screen with (even if I was just Soldier #25). And definitely Tom Hanks. But I have to say, even though he’s passed, Robin Williams was and always will be the person I wanted to work with. He was just phenomenal on so many levels. His brain worked in ways I could never comprehend and was able to navigate smoothly from a hilarious moment to a heartfelt one. And he was clearly an amazing person outside of performing. I’m always most inspired by people like him, Tom Hanks, Bill Irwin and Mark Rylance, who are known for being generous and kind humans as well as great artists.

What show have you recommended to your friends?: In the past Old Hats, The Woodsman. Currently, Walken On Sunshine. Hehehe. ; )

Who would play you in a movie about yourself and what would it be called?: Paul Rudd in The Ant-Man. We can keep the same idea but change a few plot points and get rid of the CGI and it would be a great metaphor for my life. It might confuse people but at least we’d know people would buy tickets.

If you could go back in time and see any play or musical you missed, what would it be?: Waiting for Godot with Robin Williams and Steve Martin; Streetcar Named Desire with Marlon Brando

What’s your biggest guilty pleasure?: Pizza. I mean, I could eat it everyday. I don’t…but I could. Pizza! Pizza! Pizza!

If you weren’t working in theater, you would be _____?: a waste of an existence.

For more on Walken on Sunshine, visit www.walkenonsunshinetheplay.com. For more on Dave, visit www.davedroxler.com
Michael Block at 11:05 AM
Share
‹
›
Home
View web version