Review: The Story of the Girl with a Font Name

Everyone's life is a story. Even the storytellers have a life story. In Will Coleman's whimsical Helvetica, presented by Rising Sun Performance Company, the story of a girl with a font name comes to life in theatrical fashion.
Like a strange hybrid of Peter and the Starcatcher and Fun Home, Helvetica by Will Coleman, is the nonlinear life story of a girl with tales to tell. With three actresses taking on the titular role at various ages, Helvetica's childhood companion Myron the bear narrates, mostly, the moments that shaped her life. Did Helvetica have the most difficult life in comparison to others, absolutely not. So what makes Helvetica's life important? It's relatable. And only is interesting thanks to structure. With the nonlinear format, Coleman could easily go back and examine the scene order as a couple flips and swaps could heighten the action. Simply due to the fact that the three stories aren't parallel forces you to ask how, scene by scene, they inform one another. And currently it's not as strong as it could be. And for a play of fiction, Coleman and Helvetica have great potential. It’s just taking the puzzle apart and reconstructing it. The one glaring plot point that causes some confusion is the use of the lovable teddy Myron and how the play is told when he’s put in the attic. The conceit that Coleman sets forward is using Myron to help retell the tale of Helvetica through narration. It’s a great theatrical concept but if he’s gone, how does the story continue? While it could easily be remedied through staging, cleaning up the conceit will benefit the play in the long run. 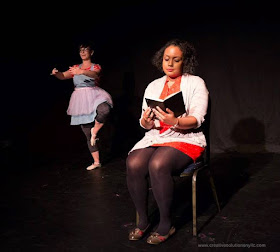 Helvetica has boundless opportunity. And that’s the beauty of it. Whether it was the lack of time or festival constraints, director Brock Harris Hill gave the audience a skeleton of Helvetica’s potential. The natural theatricality of the script allows for exciting staging and storytelling but Hill only gave a bit. But what was there had promise. It just needed to be a tightened and streamlined. With a giant cast of characters, Hill could have doubled up roles but with ten actors, he had the resources to utilize them to create the world, or at least move the world around sans run crew.
With the story focusing so heavily on Helvetica, no one else really got to showcase their stuff beyond being a supporting player in her story. The trio of women who played the various Helveticas created a decent vocabulary with one another that could easily have gone further. The strongest of the three was easily Julia Torres as Present Helvetica. She brought a bit of spunk and a lot of sass and yet remained grounded. Her storyline revolved primarily around the love and loveless relationship with Husband played by David Berman. Berman’s character ran the gamut of curveballs for Helvetica and yet he took it in stride. As the wise Myron, Sven Haabeth crafted a character that had charisma that made him the best friend forever. It worked well through narration but when he was thrust into scenes, Haabeth could have been bigger and brighter.
Helvetica is a case of the show with the potential for the next iteration. The pieces are present. Realizing them in an even more fantastical way will make Helvetica the special play it can be.
Michael Block at 1:17 AM
Share
‹
›
Home
View web version