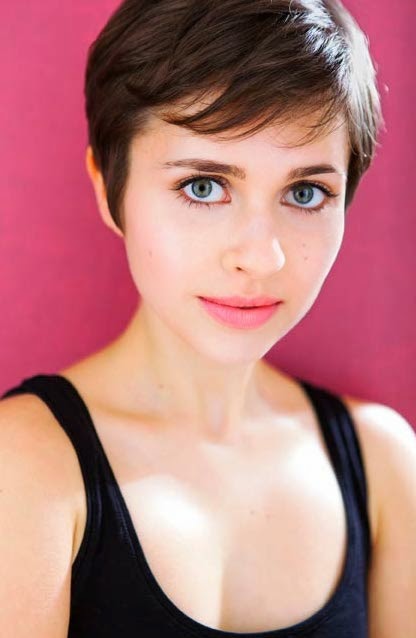 Who do you play in The ChristmApocalypse?: The Good Elf: "A pure spirit who hopes to bring Christmas Town back to its former glory."

Tell us about The ChristmApocalypse: The ChristmApocalypse is a funny, fantastical deconstruction of  a holiday most of us know very well. What I love most about the play is that it is beautifully written, funny, in all rhyming couplets, and at times is hilarious, but it also has a very serious message. The last scene of the play is a prophecy about greed, destruction, and materialism. I remember reading it for the first time and thinking "Wow, this writer has a lot to say". I should probably note that the writer is also our incredible director, Rachel Kerry.

What is it like being a part of The ChristmApocalypse?: It's so FUN. And for me, pretty physically exhausting. But it's worth every aching muscle. We have such an amazing cast of brave, unique, and truly game artists. I've found a ton of freedom being able to work in this dark, twisted fantasy world. Rachel Kerry really gave us permission to find the fullest, weirdest, deepest expression of our characters. That was what really set me on fire. I thought, "Okay, let's do this. No holding back now. How can I be the best, biggest, fullest version of a demented Christmas Elf?" And then I really started to have fun. I mean, who wouldn't?!

What kind of theater speaks to you? What or who inspires you as an artist?: I'm inspired by theater that has "balls and brass." I know that's a broad statement. But I like brave, smart artists, who lay it all on the line and aren't afraid to take risks. And I've seen that done across many genres. I'm equally inspired by Shakespeare and Chekhov as I am by Caryl Churchill and Jean Genet. Speaking of Genet, I saw The Maids with Cate Blanchett and Isabel Huppert and was totally floored. Those women inspire me because they lived so fully in those big, demented, terrifyingly beautiful characters. I also just saw Let the Right One In at St. Anne's Warehouse by the National Theatre of Scotland and was totally blown away. They told a beautiful story in a new, innovative way. And I guess that's really what turns me on the most: when theatre is bold and brave and a little bit scary.

Any roles are you dying to play?: SO many! I'd love to play Nina in The Seagull, Hedda, Masha in Three Sisters, Lady M, Ophelia, Alma in Summer and Smoke, and one of the sisters in The Maids. (There are more but I'll spare you the three paragraphs it would take).

What’s your favorite show tune?: "People" from Funny Girl. It's so dramatic and epic. A close second would be...oh anything from Jesus Christ Superstar.

Who would play you in a movie about yourself and what would it be called?: Haha! At this point I think you could only get me to star in a movie about myself. (Though I'd love to say Natalie Portman). And it would be called "Heartbreaks and Triumphs of an Unstable Perfectionist" or, "Life Between Lattes."

If you could go back in time and see any play or musical you missed, what would it be?: The original production of The Seagull.

What show have you recommended to your friends?: Let the Right One In, the production of Ghosts coming to BAM this spring from London (I got to see it in London last year), and ChrismApocalypse of course!!