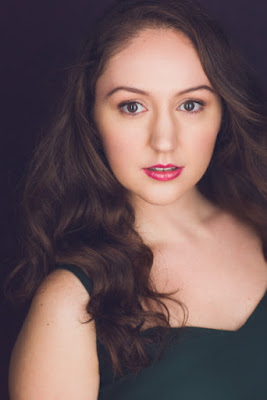 Favorite Credits: As an actor: Titania at Saratoga Shakespeare Co, Benvolio at Shakespeare and Company, Stage Kitten in Magic Trick at Theater Row, Gigi in Here We Dance, Bitch in (i heard) Anna Karenina (wanks w/ a toothbrush).  As a writer: Don't Look - workshop reading with Turn to Flesh Productions in NYC and world premiere with Something Marvelous at the Den in Chicago. Spank Me (Wearing Only Your Yarmulke) with Playwrights at the Grand and Paper Kraine in NYC.

Why theater?: Theater is the best. I love getting to opportunity to share things with people, face to face, in a room together. It's pretty beautiful that a piece of theater can really only last for a moment in time. Theater is watching a curated slice of humanity right in front of you, and I love the community and visceral reactions that it inspires.

Tell us about Anne Boleyn for President of the Class of 2014:  Yay! Anne Boleyn is a play I wrote that is going up for a one night only (for now!) workshop at Dixon Place on the 29th. It's a super fun/crazy/extraordinarily politically relevant play that has a touch of "Mean Girls" snark, "House of Cards" drama, and Wolf Hall history all mixed together. We expected to be celebrating women in politics after November 8th, but the show has become all the more important in examining how women are treated in a powerful, male-centric arena. I am playing Anne Boleyn, which is super exciting, and we've assembled an amazing team of artists. Katie Lindsay is directing, Gab Nieporent is my Co-Producer, and the cast includes Billy Berger Bailey, Avery Luna Deutsch, Diane Chen, and Rebecca Sands. It's a dream team. This production also marks the beginning of my new company, Off With Her Head Productions (aptly named), which focuses on reimagining stories for and about women, taking old ideals and turning them on their head, so to say :)

What inspired you to write Anne Boleyn for President of the Class of 2014?: Last year, I went to see Wolf Hall on Broadway with my bff who was visiting, and we were obsessed. That production was unreal. I'm always really drawn to strong female characters, who wield their power and sexuality equally and unapologetically, so Anne Boleyn has always been my girl. But, watching the show, I was really struck by the slut-shaming that occurred, and how things are not that different than they were back then in terms of how women are encouraged to exist in the world. Anne was lauded for her sensuality and attractive qualities, and then beheaded for those same things. It reminded me of how women can't win in today's society, either. I thought about how a woman can be deemed a slut for sleeping with someone she likes too quickly, but is simultaneously expected to be alluring and attractive all the time. I thought about what the 'feminist' way to navigate this dichotomy, and if there even is a correct way at all. I was really excited to modernize this piece and bring these characters to the 21st century, which I had the opportunity to do in Exquisite Corpse Company's Writers' Lab last year, in which our theme was 'unholy women.' I was lucky to have a second developmental reading with my friends at West of 10th, and I decided I felt really good about the script, and wanted to try my hand at playing Anne Boleyn myself in the production iteration. And now here we are!

What kind of theater speaks to you? What or who inspires you as an artist?: I love theater that is nearly affronting in its ability to affect the audience. I love sitting and watching something and having to clutch my heart because it feels like it's breaking, or needing to find a tissue because I am laughing so hard that I'm crying. I like art that is fired up to its full capacity, asks questions that there may not be answers to, or brings up memories and emotions that you didn't even remember you had. I always know that I am totally into a piece of theater that I'm watching if I don't find myself thinking about food (which is more difficult for me than one might think, because, although I love theater, I also am extremely passionate about food). All that to say, if I am compelled and in a fiery, loving, roller-coaster-ride grasp of a performance, that is what speaks to me. My friends and theater colleagues inspire me, because they are always searching for a way to express and connect on deeper and more imaginative levels. The gosh darn patriarchy inspires me, as much as it drives me crazy. I like writing about and exploring what it means to be a woman, and how awesome that is and how much it sucks. Generally things that drive me crazy are also inspiring to me, which is a great way to process rage and stress and icky feelings! (Lol)

If you could work with anyone you’ve yet to work with, who would it be?: I have a big list of faves in NYC. Reed Birney and Marin Ireland are some of my favorite actors. Bekah Brunstetter and Halley Feiffer are some of my favorite writers. I'm obsessed with their stuff and would kill to act in anything they've written. I also really admire other women who are living the multihyphenate life and are killin it, like Clare Barron and Heidi Shreck. They've totally helped me to reframe the work that I do and be proud that I enjoy multiple things, rather than feel insecure about it. I would also love to work with Lena Dunham, because she is badass. I love how she changed the conversation of how women can appear onscreen and what they are 'allowed' to do.

What show have you recommended to your friends?:  Whenever I'm working on a show, it's hard to find the time to go see theater, so I don't have any super current answers. The last thing I was obsessed with was Men on Boats at Playwrights Horizons. And the last thing I was SUPER obsessed with was Cygnus at Women's Project as part of the Pipeline Festival. I literally forced my roommate to sell a ticket she had for another show in order to go see that one because I couldn't stop talking about it. That was awhile ago but read that play and go see stuff at Women's Project. Also, I just saw Waitress on Broadway and it was LIT.

Who would play you in a movie about yourself and what would it be called?:  Oh man. My first instinct is to say Kate Winslet exactly how she looked in the "Titanic" because her hair was #goals and she is a dreamgirl. I am also deeply infatuated with Blair Waldorf so it would be unfair to say that Leighton Meester and Kate wouldn't have to read it out to see who was the better fit. It would probably be called.. "The Little Engine That Could?" Idk, would have to consult with the team on that one.

If you could go back in time and see any play or musical you missed, what would it be?:  I think it would be an original performance of Shakespeare's work. Twelfth Night is my favorite. Shakespeare is my number one dude and I would also love to see how the audience interacted with the actors and vice versa. That would be sick.

What’s your biggest guilty pleasure?:  Eating. Lol. Except no guilt, just pleasure. There are few things I love so much in this world as putting down a delectable Shake Shack burger in under three minutes. God's food.

If you weren’t working in theater, you would be _____?:  Ah! I would be nothing. This is hard. I would probably want to be a fancy book or magazine editor. Something that allowed me to wear nice clothes and trot around the city like I am going somewhere important. Whenever I watch "Grey's Anatomy" I feel a great desire to be a doctor but I think I actually just want to be Shonda Rhimes and also simultaneously act in her things so..

What’s up next?:  Yes! Stay tuned for what's up next with Anne Boleyn. For Off With Her Head Productions, we are beginning work on a new feminist adaptation of Richard III, featuring a cast of nearly 15 women and 3 men, set in a dystopian matriarchal society. Follow our page for updates there! And for me, I'll be acting in Brett Evan Solomon's play What Makes Us Feel Good, going up at the Tank this April, after finishing a workshop of the play last year at Dixon. Full circle!