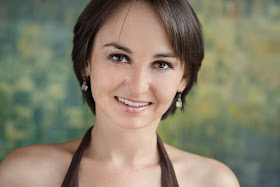 Why theater?: I had been a ballet dancer my entire life, but when I suffered a career­ending injury, theater seemed like the logical next step. I am very appreciative of the amount of influence that comes with being a playwright. As a ballet dancer and choreographer, I was able to communicate anything I desired with my audience, but only through movement. With the added element of spoken language, I am able to reach a wider audience, and have a much more significant impact. It’s a whole new way of interacting with my audience, and opening a new kind of dialogue about issues that need to be addressed.

Tell us about Interludes: A New (Orleans) Play: Interludes is a 12 character solo show with original jazz music by Darrell Smith and the 8 piece Interludes Jazz Orchestra. I play 12 characters that range from a preacher, to a stripper, to a kid tap dancing on the street for spare change, to an adventurer in a canoe and of course, some New Orleans musicians. Each character tells his or her own story, but as the play progresses, their stories combine to create a larger overarching story. While I was writing Interludes, the city of New Orleans had the highest murder rate in the nation. I wanted to focus on the dichotomy of the violence here, as well as the passionate New Orleanians who live life to the fullest.

What inspired you to write Interludes: A New (Orleans) Play?: There is a church in the Tremé neighborhood of New Orleans called St. Anna’s Episcopal Church. On the front walls of the church, they have lists of the names of all of the murder victims who have died within the city, accompanied with their age, the date of their death, and how they were killed. It’s such a powerful thing to see. There are entire families up on that wall, all under the same date. It got me thinking about how precious life is, and how important it is to celebrate the life that we have, while we are still alive. And if there ever was a city that liked to celebrate, New Orleans is it.

What kind of theater speaks to you? What or who inspires you as an artist?: I love theater that is bold, takes risks and brakes boundaries. I am inspired by life.

If you could work with anyone you’ve yet to work with, who would it be?: As a writer, Sylvester Stallone. I cry every time I watch a Rocky movie. As an actor, Melissa Leo. She is such a brave and versatile actor, which I greatly admire and hope to emulate.

What show have you recommended to your friends?: Hand To God. I really appreciate it when a piece of writing pushes boundaries, and Robert Askins’ writing does that on so many levels. As a performer in a multi­character solo show, I have so much appreciation for Steven Boyer’s portrayal of Jason and Tyrone!

Who would play you in a movie about yourself and what would it be called?: Well I hope that I would be cast as myself, because I’m an actor and I need a job. It would be called “Classically Trained Rebel.”

If you could go back in time and see any play or musical you missed, what would it be?: The original cast of Rent. Also, the premier of Rite of Spring at Théâtre des Champs­Élysées in 1913.

What’s up next?: The Gates On Earth. A single character solo show loosely based on a fictional sole survivor of the Heaven’s Gate cult. But it’s not about aliens. It’s more about choosing to live for your faith (no matter how silly it seems) when dying for your faith is an easier option.