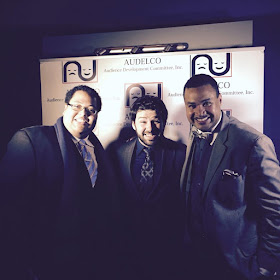 Why theater?:
CB: I have always been fascinated by the sharing of emotions that theatre allows. Whenever I get on a stage or see a performance the human condition is there in your face and you embrace it and let it move you.
AM: The theatre saved me. It’s a place where I have always felt understood and heard.
RM: I feel like theatre is the closest art-form that speaks to how I view and see the world as an artist and activist.

Tell us about Mother Emanuel:
CB: Mother Emanuel was truly a labor of love. It was the first time I ever wrote a play because the story of the tragedy struck a chord within me. In Mother Emanuel we set out to show a truthful glimpse of the power of community, love and faith.
AM: It's the world's first opportunity to learn about the brave individuals who were murdered at Mother Emanuel AME Church in June 2015. We tell their stories through testimony and song.
RM: It's a world premiere of a musical play that focuses on the last 90 minutes of the Charleston Nine who were viciously murdered at a prayer service in their church.

What inspired you to write/direct Mother Emanuel?:
CB: I received a phone call from Adam and Rajendra asking to meet up. At the time we had just started working together on another project, but then we learned about the Mother Emanuel shooting. Being that we each grew up very involved in our churches, to hear about this act of violence happening in a church just shook us to our core. We had so many emotions whirling within us and the only way we could express them was to use our artistry, and Mother Emanuel was born.
AM: I had been working on a different project with Rajendra and Christian at the time the shooting happened and it really stopped us in our tracks. As a person of faith, along with Rajendra and Christian, I felt I needed to be a part of telling this story.
RM: I was very angry about the shooting and didn't know where to put my anger. So as my mentor and one of my theatre heroes, Anna Deveare Smith once said, I put it into my art.

What kind of theater speaks to you? What or who inspires you as an artist?:
CB: I am a total Musical Theatre fan. Sometimes the only thing people have is the song in their heart to get them through their situations, and musical theatre showcases that. Mahalia Jackson, Luther Vandross, and Whitney Houston have been the biggest inspirations for me musically. Whenever they sang they connected with the lyrics and I strive to do that when I perform.
AM: I love theatre that challenges me and my humanity. I love "history" plays too. I am also drawn to Musical Theatre. I have recently been inspired by John Doyle's work.
RM: I enjoy docudrama and plays that deal around Civil Rights and historical events. I like works that fuse different styles and create new ways of storytelling. I'm inspired by Anna Deveare Smith, Lloyd Richards, Moises Kauffman and George C. Wolfe.

If you could work with anyone you’ve yet to work with, who would it be?:
CB: One of the Pattis, LuPone or LaBelle
AM: I'd love to collaborate with James Lapine
RM: Katori Hall

Who would play you in a movie about yourself and what would it be called?:
CB: I would say James Earl Jones would play me and the title would be: “You Better Sing!”
AM: Paul Rudd in "Okay, so that Happened."
RM: Jeffrey Wright in "Eyes on the Prize"

What’s your biggest guilty pleasure?:
CB: Mac and Cheese and Pernil (roasted pork shoulder)
AM: I am a bit of a comic geek.
RM: I enjoy buying Cole Haan shoes and Air Jordans

If you weren’t working in theater, you would be _____?:
CB: Funny, I would be doing my survival job that I have now. Working in the Student Life (clubs and organizations) office at a St Josephs College.
AM: A stand up comedian
RM: Talk Show Host

What’s up next?:
CB: Mother Emanuel has inspired me to write more. I am not sure what exactly I will write yet, but it will most likely be musical-based.
AM:  Some more writing. I have some projects I've been working on.
RM:  A Vacation. I've been the Guest Artistic Director at New Freedom Theatre and I directed, choreographed, and produced three shows back to back there and now Mother Emanuel. I'm taking a two week vacation in California.