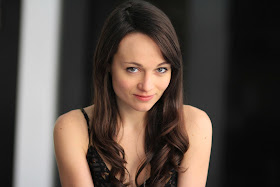 Why theater?: Math broke my heart after multivariable calculus.

Who do you play in SCHOOLED?: Claire. She's a 22-year-old undergrad film student at “NYU” with a hot boyfriend, a story to tell, and a mission to prove herself. Maybe some daddy issues, but don't we all.

Tell us about SCHOOLED: I describe this show to my friends as the millennial Oleanna or an inverted Speed the Plow with the female at the apex of the triangle (as opposed to the toilet-hole of it). My Mametaphors are admittedly cock-eyed summaries and enlighten only as far as subject matter. Lisa has a distinct voice, a deep heart, and a natural sense of humor that is worthy of great venues and major networks. But beyond my unfair comparisons and brief accolade, that's all I'm going to say.

What is it like being a part of SCHOOLED?: It's like chocolate. I mean, I've never been surprised, even a little saddened by the time when rehearsal is over.

What kind of theater speaks to you? What or who inspires you as an artist?: British. I'm arbitrarily an anglophile. I have no real connection with the island, nor have I ever been there, but I phile them. A lot of what I do (in life and for professional pretend) comes from my dad. He's not British, he's just nuts.

If you could work with anyone you’ve yet to work with, who would it be?: My Sister. Not in the business, but if she were, she'd be vicious.

Who would play you in a movie about yourself and what would it be called?: Kate Bush in "Venus Retrograde"

If you could go back in time and see any play or musical you missed, what would it be?: Opening night of Death of A Salesman.

What’s up next?: Millie in Inge's Picnic at Palm Beach Dramaworks. Pretty plum tickled about that one.
Michael Block at 4:40 PM
Share
‹
›
Home
View web version